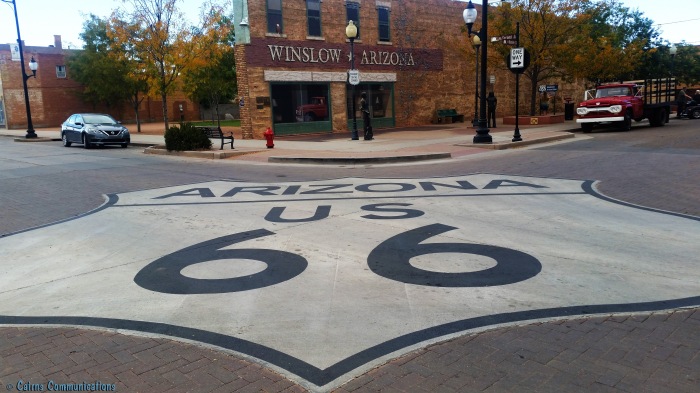 If I ever had any doubt about the impact that popular music can have on the tourism industry, that was dispelled on Sunday, when Shirley and I rocked up to Winslow, Arizona.

If the name doesn’t mean anything to you, you are either too young, or live in a country that never played The Eagles on the radio.

And even then, it’s likely that you’ve heard the quatrain –
“I was standing on the corner, in Winslow Arizona,
Such a fine sight to see
It’s a girl, my lord, in a flat-bed ford
slowing down to take a look at me”

Shirley and I had gone on a trip through the Petrified Forest National Park, and through Arizona’s Painted Desert.

They are amazing .. millions of years of nature moulding the landscape into weird, wonderful and wondrous shapes – I’ll almost certainly use images from those parks in the course of this On The Road series.

But back to Winslow.

The town is about 60 miles away from the Painted Desert via the I-40 Interstate – at 75 miles an hour!

And when we got there, there were probably 75 people all milling around the corner of Second Street and Kinsley Avenue – the historic Route 66 which ran through the town until it was replaced by the I-40 – which bypasses Winslow.

On the corner, there were two souvenir shops, a cafe (which doesn’t open on Sundays – something that seems a curious commercial decision – and a wall mural (strictly speaking its a Trompe-l’oeil, or 3d painting).

Talking of commercial decisions, for 30 years after the song was a hit in 1972, there was no formal attempt to ‘cash in’ on the popularity of The Eagles’ first single – and first hit.

But then in 1999, the Standing on the Corner Park was unveiled – and thousands of tourists are drawn there each week.

In the half hour or so we were there, I’d estimate that more than 100 people came, or went .. and the interesting thing was listening to the polyglot of accents.

I recognised at least three different British Islands accents (One from London, one from the Midlands, and one from Ireland) then there were Aussies, a Kiwi, a couple of European accents that I only half heard, and more different US accents than you could poke a stick at.

One couple we spoke to were from South Carolina ..they’d fled their home when Hurricane Andrew started barreling toward them – and ended up in Northern Arizona. As you do.

It was, as I say, an amazing example of how popular culture can bring together a disparate group of people from all over the world.

All of whom just wanted to chill, and “Take it Easy” 🙂

One thought on “Travel Pics Theme: On the Road Again! Winslow – a world crossroads.”