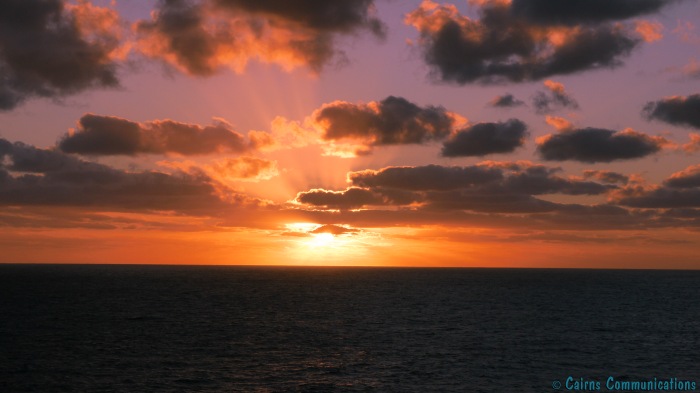 Apparently, it’s all to do with moisture (or dust)  concentration in the lower atmosphere which blocks the shorter blue light-waves, but allows the longer red light-waves through. At sunset, red rays mean that there’s probably a high pressure system coming – and that means clear skies and good sailing; A red sky at sunrise means you are quite possibly sailing into rain.

Or so a cursory check of the interwebs suggests.

Me? All I know is that at sea, sunrises and sunsets are just amazingly spectacular.

Which brings me to today’s #Travelpic.

This was taken in the South Pacific in July 2011 – We were on our way home from a Pacific Islands cruise, and had left Port Vila, in Vanuatu, about 24 hours earlier.

I can’t be exactly certain where (the Lumix G10 used to take the image doesn’t have GPS) – but it was somewhere in the Coral Sea, probably just north-east of New Caledonia’s main island , Grand Terre.

The Coral Sea is what’s known as a ‘marginal sea’ – an area of ocean bounded by islands, archipelagos, peninsulas and land-masses. In the case of the Coral Sea, there’s a rough horseshoe made up of the Queensland coast, up to New Guinea, and then from the Solomon Islands to Vanuatu and New Caledonia.

The Coral Sea is most famous in modern world history because of the Battle of the Coral Sea – the pivotal naval battle between Allied forces and those of Japan in World War Two.

It was the first time that aircraft carriers faced off against each other – although none of the ships could actually see each other.

Technically it was a victory for Japan – but two of its carriers were so damaged they couldn’t take part in the Battle of Midway a month later – a battle the Allies won decisively, checking the Japanese advance and changing the course of the Pacific war.

But these days the Coral Sea region is sailed by more peaceful ships – like the P and O Pacific Dawn, from which this photo was taken.

And sunsets like this provide a magnificent backdrop to the holidays being enjoyed by travellers like my wife and I.

Now, not every evening gives a gorgeous view like this – but Mother Nature obviously decided to ‘lay one on’ for Shirley and I – because this was our 32nd Wedding Anniversary, and I snapped this as Shirley was dressing for dinner – where her radiance was this sailor’s delight 🙂