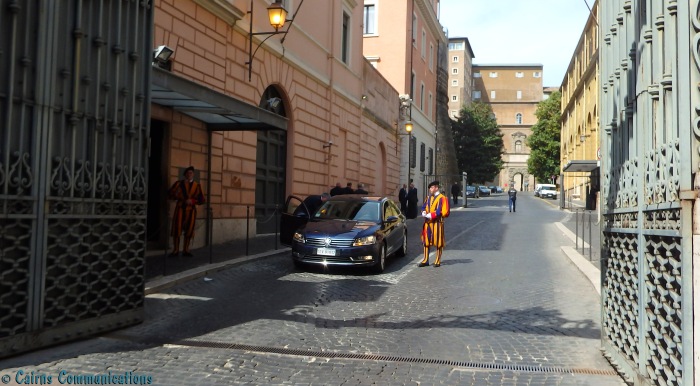 The Vatican is not, strictly speaking, part of Rome (it is a separate city-state, an enclave inside Rome – and not part of the greater Italy that surrounds it).

And so we shouldn’t be surprised that the ‘Armed Forces’ of the Vatican aren’t Italian. And aren’t in fact ‘Armed Forces’. They are a sort of Papal bodyguard and security service – and are the only Swiss citizens allowed to serve foreign powers.

I’m talking of the Swiss Guard, those men (and they are always men) who look like toy soldiers clad in yellow blue and red pantaloons and puffy blouses. And who are often the Swiss equivalent of Marines or Navy Seals, armed and ready to take a bullet for the pope in a heartbeat.

The Swiss Guard were established just before 1500 – a small army of mercenaries who served primarily as close protection for European courts.

They were particularly prominent in France where they were divided into the ‘Hundred Swiss’ (bodyguards) and the Garde Suisses, who secured the boundaries of palaces – but also served as fighting troops in various wars.

Established in 1506, they have protected the Pope ever since – with a few notable exceptions.

One was a 10 year period from 1527, after they were all but wiped out while fighting a rear-guard action at the Vatican to allow Pope Clement VII to escape through a guarded passageway.

Other occasions where the guard was disbanded include when popes were forced into exile (Pius VI, Pius VII, Pius IX) at the hands of the French.

During much of its time, the Swiss Guard were Swiss only in name (with soldiers being locally-born members of Swiss families living in Rome) – but about a hundred years ago, the Guards were modernised and reformed.

Military discipline was reintroduced, guardsmen were only chosen from the Swiss army, and the renaissance-inspired uniforms were introduced.

Since then, their role has seemed mostly ceremonial – but looks can be deceiving.

The attempted assassination of John Paul II, and the rise of Islamic terrorism, have meant that the Guards are constantly being trained in close protection – and are armed with the same pistols and carbines as used in the Swiss army.

If you look closely at today’s picture, for example, you’ll see the guards on duty have ceremonial swords on their left hips – but Sig Sauer pistols on their right.

I mentioned that the guards are all men – their Commander said that women were ‘eligible to join’ a couple of years ago – but gave no timetable when that was likely to happen, and so far, there has been no sign.

Oh, and I also mentioned that they were the only Swiss allowed to serve a foreign power: under Swiss law, you cannot be a Swiss citizen and serve in anyone else’s army – with the notable exception of the Pontifical Swiss Guards, as befits a country where the largest single religious affiliation is Roman Catholicism.