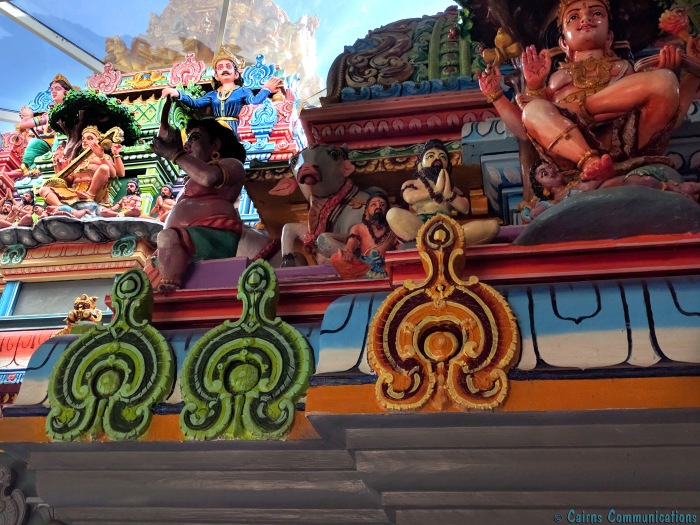 “Verily I say unto you, No prophet is accepted in his own country”

I remember, back in the days when I was a regular at a church youth group, discussing how this bible verse had (like so many others) an application in non-religious terms .. how we all tend to ignore that around us because it is so familiar.

That explains how my wife and I, as a young couple with a  young child, could live in Far North Queensland and yet not get out to the Barrier Reef islands until after we left the area, and came back on holidays.

Or how we could blithely dismiss the attractions of our home region because – well – they’re just there.

It’s when telling non-locals about the attractions of South East Queensland that we appreciate why it is a tourist mecca – why millions come here each year for the Gold or Sunshine Coasts, for the theme parks and zoos, for the beaches and rainforests.

And even then, there are gems that get overlooked because they are a bit off the well-trodden path.

Like a Hindu temple at South Maclean, a town of about two thousand people on the Mount Lindsay Highway between Brisbane and Beaudesert.

When I visit the Jimboomba Toastmasters Club (I’m ‘Area Director’ for a series clubs including that one), I drive past this fascinating looking Hindu temple. Normally it’s too late to drop in, or I am on my way to a meeting and can’t spare the time.

But I had occasion to pass by the Sri Selva Vinayakar Koyil around mid-morning one day – so I stopped to take a closer look.

It’s a Tamil temple, dedicated largely to the elephant-headed God Ganesh (the Vinayakar in the name comes from a famous poem about Ganesh, and the term Koyil is Tamil for temple – built in the Dravidian style, with a rising pyramid shape.)

It was built about a quarter of a century ago, to service the growing Tamil population in south-east Queensland.

Normally, you aren’t allowed to photograph inside a Hindu temple – but I was told it was fine, as long as I didn’t focus on the deities in their individual shrines (besides Ganesh there are also shrines to Krishna, of course, along with Siva, Vishnu and Navagraha.)

And in today’s #travelpic, there’s an interesting juxtaposition between the colourful carvings of characters from the Vedas, the glass ceiling of the temple, and the azure skies of a South East Queensland spring.

It would be even more interesting, I suspect, to see the same view as an afternoon thunderstorm rolled through in summer.