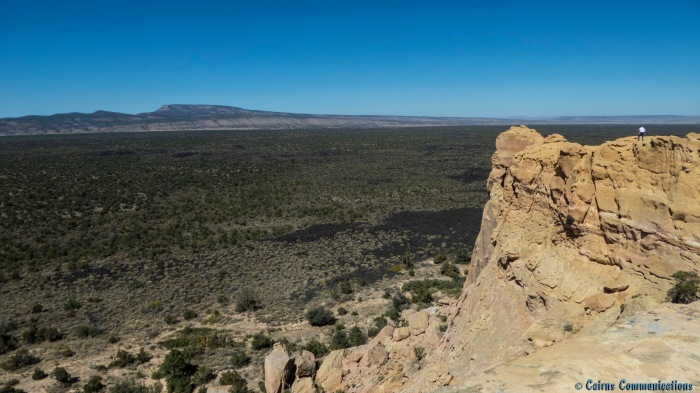 If you will excuse the indulgence, today’s #Travelpic is, in many ways, a bit like the relationship between me and my lovely wife, Shirley.

I have always loved sandstone, and the way that single grains of sand can bind together under pressure – to create something sold and strong, and yet malleable and shaped by the events surrounding them.

Shirley, on the other hand, loves volcanoes and lava – and the flowing, red-hot flows that become hard, unyielding igneous rocks.

In the El Malpais National Park in New Mexico near the Arizona Border, the two come up against each other – and the result, rather than being in conflict, creates something beautiful – the Sandstone Bluffs.

The area’s largely unpopulated – but over the centuries, it’s been home to the Ancestor Pueblo people, to the Navajo, to the Spanish explorers of the 16th century – and later to refugees from the Dust Bowl and Great Depression of the 20th century.

All have moved on – but while Man’s been unable to ‘make a go’ of it, nature remains.

We were there a day or two after rain – and there were small puddles in potholes, or tinajas.

And in those tinajas we saw tadpoles and fairy shrimp swimming around vigorously.

And yet another visitor to the site says when he was there only three months ago, the potholes were dry and empty – with no sign of life, just a patina of dust.

So the life that we saw teeming in the puddles had been laying dormant, just waiting to grow, given the right conditions.