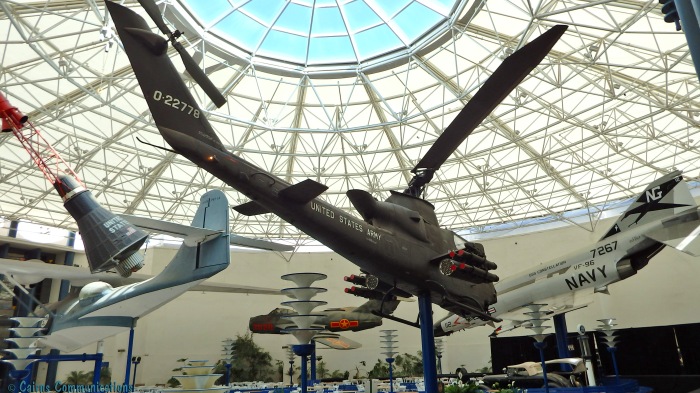 At first glance, San Diego may not seem like a natural home for a Air and Space museum – Complete with an actual Apollo command module (Apollo IX – “Gumdrop”).. but the city does have a tradition of aviation: after all, its airport was originally known as Lindbergh Field, and the aviation pioneer tested his famous Spirit of St Louis in San Diego before his historic transatlantic flight.

It was also the home of naval aviation in the US, and of the Ryan Airlines factory (which in the 20s and 30s built commercial aircraft, but by the 50s and 60s was building some of the most innovative and technically astounding experimental aircraft)

The city was also host to Consolidated Aviation – or Convair – one of the largest manufacturers of military planes in World War Two.

So it has, as I say, an aviation tradition – and it also has a well-regarded Air and Space Museum.

The museum is one of a whole swag in Balboa Park and is in the old Ford building, an Art-Deco building from the 1935 expo built in the Streamline Moderne style.

I mention the building style not because I am an art-deco geek (although I am) .. but to mention that the building is supposed to represent a stylised V8 engine – with a large central ‘Pavilion of Flight’ which can still be hired for weddings, conferences, etc.

In that pavilion, below the imposing glass dome, there are a variety of aircraft on display – including a Consolidated Catalina, a MiG-17, a mock-up of a Mercury spacecraft, Bell Cobra helicopter, a Ford 5-AT-B Trimotor (out of shot in our picture) – and a Phantom jet flown during various sorties in Vietnam, complete with its complement of Sparrow and Sidewinder missiles.

While we were there at the museum, we also saw a ‘Leonardo Da Vinci’ exhibition which was fascinating, and had a (not so) quiet ale at the Flight Path Grill on the building’s roof.

The Grill gets its name from the fact that the building is in the main flight path to the San Diego Airport and as you sit there, commercial jets pass overhead on their final approach to runway 27.