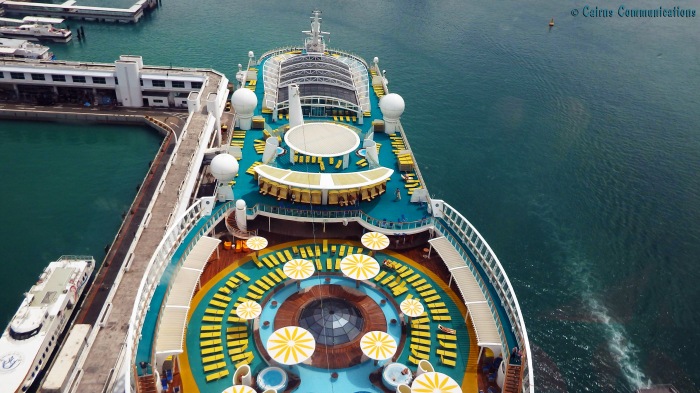 This week, our Travel pics series is C, for Cruise Ships.

The images have all been shots we have taken in, on or of cruise ships in our travels. Most we’ve actually traveled on – but a couple were passing us by (or, in  this case, we passed above it!)

This is the AIDAbella, moored in Singapore in January 2016.

Anyway, as we crossed the Harborfront Centre Cruise Ship terminal, on a showery Friday, we spotted the AIDAbella below us.

Now, we’d seen the AIDAbella before: she came into port at Malaga, Spain about 30 minutes after we did on the MSC Musica in April 2015 – but we’d never seen her from this angle 🙂

Built just seven years earlier, this Sphinx class ship normally carries about two thousand passengers, although it could carry 2500, with a crew of 650 – and uses a lot of state-of-the-art technology to reduce costs.

Operated by the German arm of Carnival Cruises (under the executive control of Italy’s Costa cruises, the bella (note – all AIDA ships have lower-case names following the all-capital AIDA prefix) is designed as a seagoing club resort.

That means it has amenities and facilities designed for younger, German passengers.

Why do I mention this? Well, our picture today is from midships forward.

Had it been a more sunny day, and had I shown a shot of the rear of the vessel, you may well have spotted the nude sunbathing area.

(And yes, I have checked the rest of the pictures I took that afternoon – no ‘Naked Germans Of The Week’, as the old EuroTrash program would have called them.)