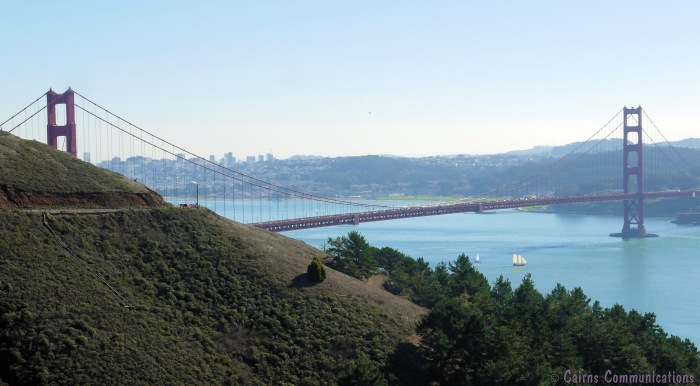 This week, we’re looking at W for World Famous locations.

Today’s view is one of the most recognisable in the world – San Francisco’s Golden Gate Bridge, crossing from the Marin headland to the city of San Francisco.

And under the bridge, pleasure craft sail the waters as they flow from San Francisco Bay to the Pacific Ocean.

The Golden Gate is the actual channel connecting the two bodies of water – and despite the urban legends, it has nothing to do with the discovery of gold in California.

The name predates the gold rush, and in fact pays homage to the Golden Horn in Turkey – next to the Bosporus.

The Golden Gate Bridge itself is nearly 2km long, with 1.3km between its main pylons – making it the longest suspension bridge in the world when it was built.

It has since been surpassed a half a dozen times, but is still an impressive sight, with its burnished orange paint-job. The colour is actually called International Orange – it’s no longer the red lead primer and topcoat originally used .. I wonder why? 🙂

Part of the reason for the colour, by the way, is because it stands out against the fog that rolls in to San Francisco most days – the fog is so regular that locals even have a name for it .. Karl.

And the Golden Gate (the strait, not the bridge) is partly responsible for the fog. The confluence of waters of different temperatures, combined with the heat in inland valleys drawing in cooler air through the strait, create the fog that is emblematic of San Francisco.

When most people think of bridges in SF, they think of the Golden Gate Bridge – but there are a number of others.

Strictly speaking, the San Francisco – Oakland Bay Bridge is a series of bridges (from SF to Yerba Buena Island, and then to Oakland)  and it carries a quarter of a million vehicles every single day. But visually, it’s quite similar.

The other bridges across the SF Bay are quite frankly pretty boring. The Dumbarton, and San Mateo – Hayward bridges for example are single-layer constructions close to the water. The Richmond – San Rafel is a bit more interesting (especially at night) with its middle stretch raised above the bay – but quite frankly, none have the grandeur, or the cachet, of the Golden Gate Bridge.

One of the most fun experiences I’ve had in San Francisco is riding a (hired) pushbike from Fisherman’s Wharf, past the Presidio, and then across the Golden Gate Bridge and down into Sausalito on the Marin side.

That might sound scary – but you actually ride on the footpath rather than the roadway of the bridge. In fact, on weekends, the footpath on one side is actually reserved for pushbikes, and even on weekdays cyclists and joggers share the footpaths with good humour and grace.

One thought on “Travel Pics Theme: W for World Famous. One of America’s finest bridges”