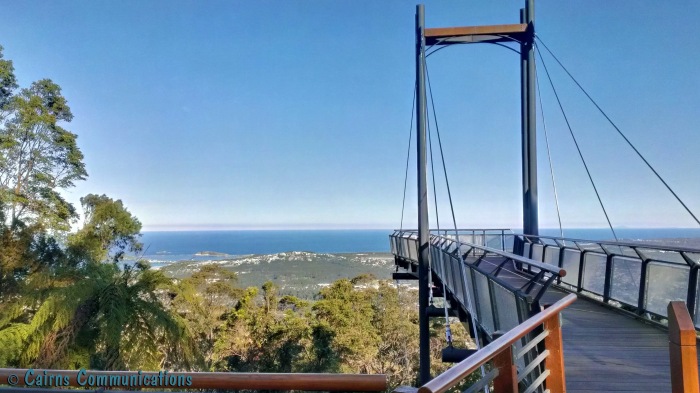 The theme letter for our ‪‎travel pics this week is Y – for You should see the view!

For Saturday, it’s the Forest Sky Pier at Coffs Harbour, roughly halfway between Sydney and Brisbane.

The Sky Pier is at Sealy Point lookout, a few minutes north of Coffs – and near the Big Banana tourist attraction (which isn’t as big as I remember it, from my childhood)

The Forest Sky Pier offers gorgeous coastal views over the city of Coffs Harbour and up and down the coastline. There are also walking tracks through rainforest, ranging from one to three hours – with picnic tables and toilets provided.

We visited while we were staying at the nearby Worldmark resort – but even if you aren’t staying in Coffs, it’s only a 10 minute drive through some lovely countryside to reach it.

It’s not particularly well signposted but after a shade under 4km of windy road, you enter Bruxner Park state forest and there’s a turnoff to the left marked ‘Sealy Lookout.’

The views of Coffs Harbour and surrounds are quite stunning, or they were on the near-perfect winters day that we went there.