And if you decided to give one gift each day, the gift-giving season would last an entire year, rather than just the 12 days from December 25 until January 5 (or the period between Christmas Day and Epiphany).

Why? Well, here’s the thing. 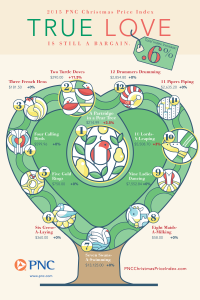 During the week, I spotted a story suggesting it would cost more than $US34,000 to buy all the gifts mentioned in the ’12 days of Christmas’ …

But when mentioned this to Shirley, I then said something like “that’s assuming you only buy each day’s gifts once” – and she was all like “whattya mean?”

I said that I’d always assumed that the gift giver actually gave 12 partridges (one on the first day, one on the second, one on the third etc) .. or 40 gold rings (five each on the fifth, sixth, seventh, eight, ninth, tenth, eleventh and twelfth days)

Shirl, on the other hand, always thought each gift was given only once.

But seriously, the discussion got me investigating, and the general consensus falls on my side of the argument. But it also raises some interesting observations.

I created a spreadsheet (as you do!) of the gift-giving – and found that the Partridge in a pear tree, and the 12 drummers drumming, are actually the LEAST numerous gifts – at a total of just 12 each (12 days x 1 partridge, and 1 day x 12 drummers).

The most numerous gifts are the geese and swans (42 apiece).

Perhaps the saddest figure in this whole thing?

The cheapest gift is the milk-maids. They would only cost a total of $290 for their 5 days of milking at the US minimum wage of $7.25 an hour.