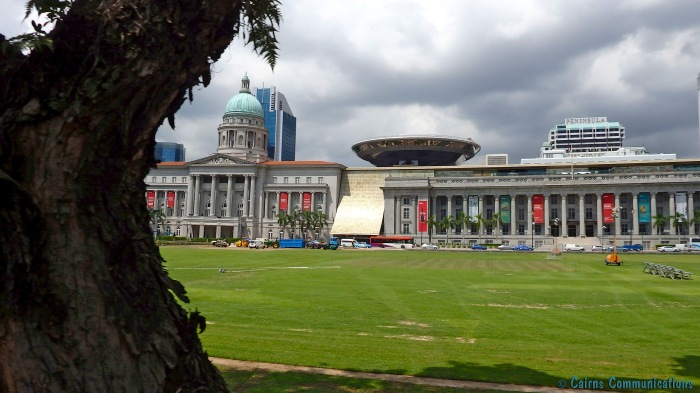 The theme letter for our ‪‎travel pics this week is S, for Singapore.

For Tuesday, it’s the Singapore Supreme Court (old and new).

In the picture, you’ll see a building with a cupola (the old Singapore Supreme Court) and a building beside it with a colonnade of columns – the former City Hall.

Directly behind them is the new Singapore Supreme Court – that’s the structure that resembles a flying saucer, or the old “Jupiter 2″spaceship from Lost in Space.

Both are imposing buildings – and each, in its way, represents the aspirations of the time.

In the 1930s, Malaya (as it was then) was looking to project stability, and solidity, and pomp … but by the time of the new court building, in the years which started the new millennium, Singapore was much more interested in presenting itself as modern, forward thinking – even futuristic.

In the foreground is a public space called the Padang Besar (or playing field) – site of many public events in Singapore.

One thought on “Travel Pics Theme: S for Singapore”