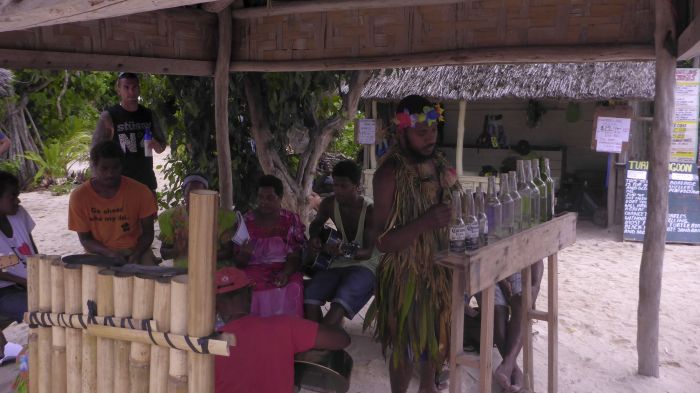 Hundreds of thousands of visitors head to Vanuatu’s Mystery Island each year – almost all of them offloaded from passing cruise ships for a day of snorkelling, and swimming, and seashell collection, and sun.

And for an uninhabited island, this tropical paradise does a remarkable job of catering to them all.

As I say – no one lives here, and on the day we arrived, we watched as many boats made their way across the intervening water carrying t-shirts and tea-towels, souvenirs and sarongs, lobsters and lemonade bottles – everything needed to cater for up to a thousand day-trippers from on board the Legend of the Seas.

As it turned out, fewer than 300 of us were actually able to get ashore, because of swells which damaged the jetty – and that may have impacted on our experience.

But more on that in a moment.

Mystery Island is tiny – so small you can walk around it in under 20 minutes.

The beaches are magnificent, palm-fringed and sandy, but with coral outcrops just metres off the shoreline. 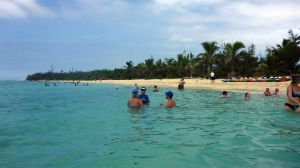 The day we were there it was quite hot, and very sunny – almost perfect beach weather, provided you made sure you were slathered in sunscreen.

The island is dotted with trees, providing shade from the sun (and the occasional shower) and there was plenty of space for us all although when bigger ships like the Voyager of the Seas visit – with four thousand passengers at a time – I imagine it would be quite crowded. (NB – an earlier version of this post said that in the past, there had been two cruise ships using the island on the same day on occasion. This was based on information supplied by a local. I am assured that is is NOT the case.)

The island is also flat – in fact, its main raison d’etre is a grass airstrip which was built in World War Two, and which (normally) allows twice-weekly flights carrying passengers and supplies to the more mountainous Aneityum nearby. Locals told me that the airstrip is currently needing repairs, so planes don’t call any more – although a social media user with close ties to the island tells me that’s not the case.

But other than the airstrip, there’s very little on the island apart from a row of market stalls, half a dozen ‘pit’ style toilets, and an ‘airport’ building – about the size of a large house.

I’m told there is a $200,000 modern toilet block with a huge massive eco-friendly septic system – but if so, I missed it. Perhaps that was what was behind the barrier which blocked off a small Colorbond building near the pit toilets. In any case, the toilets were clean, supplied with toilet paper, and obviously well maintained – and with disinfectant for handwashing just outside.

There are also half-a-dozen coconut thatch huts which serve as sales offices for the various tours that are on offer on (and around) the island.

From these huts you can book sail-boat adventures, and visits to turtle rookeries, and snorkelling expeditions, and glass-bottom sea-kayaks.

As you see from the pictures, these are all pretty much catch-as-catch-can – but there are proud claims that the snorkelling adventures, for example, are “run by a PADI certified diver”, and “your safety is our first priority.”

I mentioned that only about 300 of us were able to get ashore – and what that meant was many of the tours were combined. For example, I chose to go on a snorkel trip that was supposed to show me ‘eagle rays’, and ‘shark resting beds’, and ‘turtle holes’.

But that trip ended up being combined with an entirely different snorkel adventure – because of a lack of numbers. The net result? I got to see lots of fish, and lots of coral – but nary a turtle, ray, or shark was to be seen.

And as for ‘your safety is out first priority’? There was an incredibly strong current running the day we were there, and that would have been fine for a drift snorkel … but few if any instructions were given – and our group of around 10 divers were quickly scattered in choppy seas.

I ensured that I could always see the group leader’s incredibly bright yellow fins – but because I had to keep watching for them, I didn’t get to see as much as I would have liked of the sea creatures around us.

And at the end of the 30-minute snorkel, it was time to get back in the tinny. Which had no steps.

I really struggled to get back on board, as did another woman who nearly tore a shoulder muscle getting back in the boat – which further marred the experience.

So if you are going to go snorkelling at Mystery Island, make sure you ask the guide about the level of difficulty.

On the other hand, other passengers we know took the boat “for old people”, and say they had a marvellous time circumnavigating the island and hearing all about its creation and legends.

Other traps for young players?

There is no food to speak of on the island.

You can buy a fresh coconut for about $2, a soft drink or water for about $5, and a packet of crisps or biscuits for between three and six dollars – but the only substantial tucker on the island is fresh-cooked lobster.

We didn’t partake – but again, other passengers told of prices between $25 and $50, depending on which local you approached 🙂

So that’s Mystery Island – a tropical paradise, but also one entirely driven by the tourist trade. 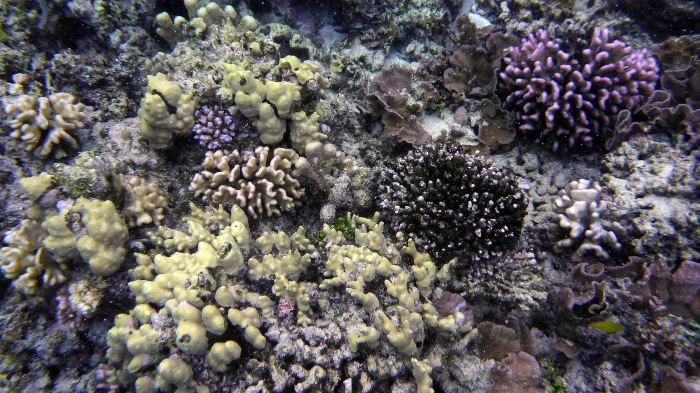 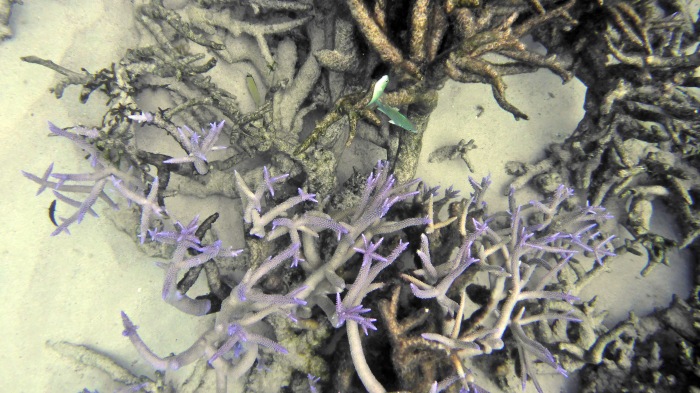 One thought on “Tuesday Cruiseday: Mystery Island, a review”