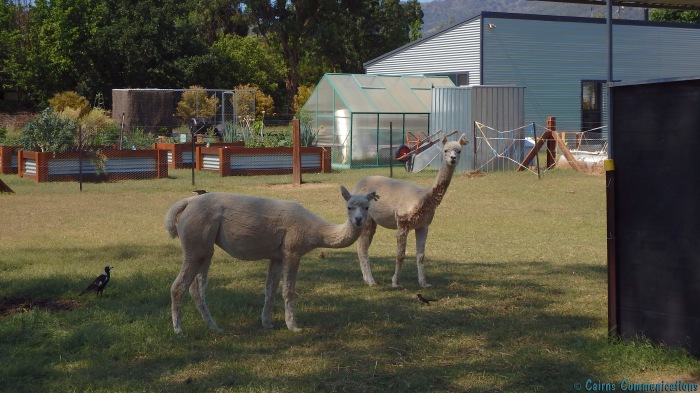 Are you llooking at me?

This week, our letter theme is Z, for Zoology.

Are you Llooking at me? Are you?

‘Cause we are Llooking at you!

Yes, I know these are alpacas, not llamas, but I don’t often get the chance to commit such puns to the page … Oh, all right, Alpaca it in now…

Last year we were driving down to Tamworth in the New England region of NSW when we came across these two alpacas, and their avian sentries, in a yard of a rural home in the small town of Moonbi (about 20km from our destination)

Apparently, there was once an “Alpaca Cafe” next to this field – but it’s since gone out of business.

Anyway, we spotted the animals, and had to stop to snap a picture.

We have a relative-by-marriage who is fixated on South American camelids, and we thought it would be fun to send her a Facebook update with these two.

But that started me thinking: why alpacas here?

Turns out, there’s an active alpaca and llama breeding industry in the area – with about 25 studs that I could find in the Hunter Valley / New England region.

I guess it should come as no surprise: some of the best superfine wool in Australia is grown in the region, so if sheep thrive, the area’s probably also ideally suited to Alpaca farming.

Oh – and the difference between Llamas and Alpacas?

Well, many llamas are twice the size of alpacas having been bred as pack animals, whereas the alpaca rarely get bigger than about 80kg and has a much finer, more productive, fleece.