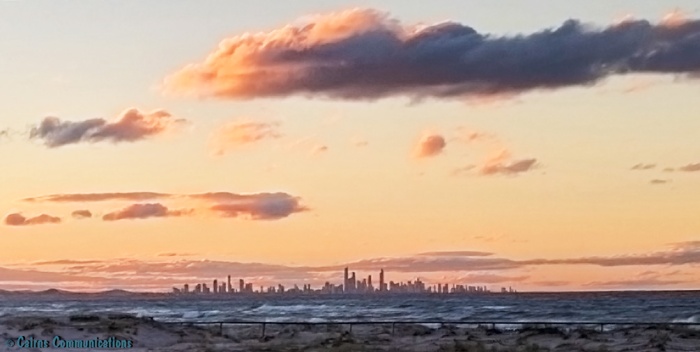 This week’s Travel Pics theme is A for Australia.

There are an estimated eight million overseas visitors to the Gold Coast every year – along with nearly 4 million domestic visitors.

Think about that latter figure for a moment. There are 23 million people who live in Australia. And nearly 4 million of them will stay on the Gold Coast for at least one night. No wonder it’s Australia’s favourite holiday location.

But the intriguing thing about the Gold Coast is that it is, in a lot of ways, all things to all people.

It’s a 60km long stretch of land with beaches on one side and mountains on the other – 1400 square kilometres, with half a million residents, theme parks and wildlife sanctuaries, casinos and condominiums, beaches and restaurants …

At its heart is Surfers Paradise – all glitz, and sparkle, and flash, and fun .. and booze, and sleaze, and drugs.

One its southern and northern extremities, life is a lot less frenetic … this is where you see the older beach houses that still stand, housing generations of coast-goers coming back to the same spot year after year.

Inland, there’s the dormitory suburbs where tradies and teachers and sales staff and supermarket cleaners and all sorts of people live out lives not so different to anywhere else in the nation – and yet they are just minutes away from a location that millions of others dream about visiting.

On the subject of dreaming, this image reminds me a bit of a dreamscape.

We were on the southern Gold Coast – opposite a Worldmark time-share we part-own, and were looking north to Broadbeach and Surfers Paradise.

It was a windswept winters afternoon, and the combination of chop on the waves, an eerie fading light and the high-rises of Surfers rising in the distance just struck me as … amazing.

I only had my phone with me, so the image quality’s not as good as I would like … but I’m still pleased with the feelings this snap evokes.