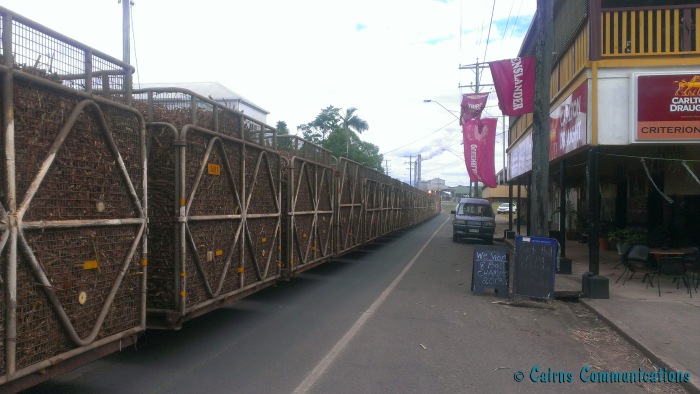 Out on the patio we’d sit,
And the humidity we’d breathe,
We’d watch the lightning crack over canefields,
Laugh and think, this is Australia.

Our Travel Pic theme for this week, of course, is A for Australia – and GANGgajang’s lyrics from ‘Sounds of Then’ contain a line that is just so quintessentially Australian – even though the vast majority of Australians have never been within coo-ee of a cane field.

Sugar cane used to play an integral role in Australia – even though it was really only in Queensland that it was grown.

But plays like The Summer of the 17th Doll were on the reading list of many Aussies – and the vision of the cane-field set alight captured the imagination of city dwellers and country kids alike.

Which is why this image – of a cane-train rolling down the main street of South Johnstone – is so poignant.

This used to be a sight that would greet motorists up and down the coast of Queensland and New South Wales … but many of the sugar mills that were the lifeblood of coastal towns have now gone.

There are only two dozen mills left now – from Grafton in NSW up as far as Mossman, north of Cairns.

The Innisfail region was once host to half a dozen – now, only South Johnstone remains.

And, in the cane season, it’s still host to regular cane-trains, great lumbering cages of cane, harvested on farms and then brought by tram to the mill for processing.

The cane-trains are not only a great source of amusement for tourists, they are also a great source of income for ‘grey nomads’, caravanners and others who head north each year to pick up seasonal work like driving the trams or acting as guards.