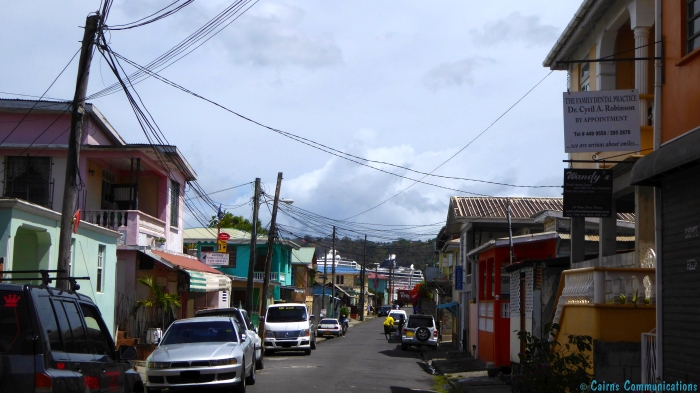 This week, our Travel pics series is D for Dominica.

For Friday, it’s a typical street scene in Roseau, the capital of Dominica – and a town of just 16,000 people.

Known as Wozo in the local creole, Roseau is on the site of a former native village but it didn’t begin to grow until French settlers arrived in the 16th century.

They called their settlement ‘Reed’ (or Roseau, in French) after the swamp plants that grew along the river which delineates the town, and their higgledy-piggledy streetscape can still be seen – despite England taking possession in the 18th and 19th centuries.

There are also some examples of French architecture, along with many examples of the English style (and English streetnames) – and of course, there’s a local patina over it all.

Roseau is the main port for Dominica – and it caters not just for freight, but also for the cruiseships which dominate the town when they arrive.

And I don’t just mean physically (although, as you see in today’s travel pic, a ship like the MSC Musica towers above the one and two storey buildings).

They also dominate in a demographic and economic sense.

So when a cruise ship disgorges two or three thousand passengers, that has a serious impact on the town, and indeed on the whole country.

Of course, those visitors are only there for a day – but half-a-million day trippers each year can still make quite a splash.

Which is still, it’s worth remembering, four times the entire Dominica population, and nearly 20 times the population of Roseau.