I’m always intrigued by the different things people want from a cruise.

For some, it’s to relax around the pool, reading books and drinking cocktails – sometimes not even getting off at ports, because its all about the boat.

For some it is an excuse to eat, and drink (often to excess) because “what the heck, we are on holiday”.

But for those who don’t want to give up their fitness goals – or who even want to step ’em up, there’s always the gym, and the running track.

And on two cruises out of Sydney this year, there’s even bootcamps run by Shannon Ponton.

The Biggest Loser personal trainer is hosting two bootcamps this year – one on the  Carnival Spirit to Vanuatu in April, and the other on the Carnival Legend in November.

If bootcamps aren’t your thing, perhaps bonus drinks are.

Cunard are currently offering Free Upgrades and Free Gratuities in all categories, plus Free Drinks in the Grill Suites on select voyages.

The upgrades include Oceanview to Balcony, Balcony to Princess Grill Suite, Princess to Queen, free drinks in Grill Suites and free gratutities included in all upgrades.

Seabourn is offering up to a grand in onboard credit – but only for those in Penthouse and Premium suites. 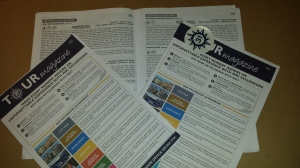 MSC still has its incredible “free birthday cruise” (travel on a cruise that includes your birthday, with a partner, and you get your cruise for just the cost of port fees), and its “Kids under 13 travel free” deal (again, port fees apply – but if you don’t mind your pre-teens sleeping in the same cabin as you, that’s an excellent offer!)

In other cruise news, we spoke last week about the 4 new ships that Carnival announced it was having built (one for Princess, two for Costa Asia, and one for P&O Australia).

But those are still three or four years away. It’s worth remembering that there are four new ships coming into service this year alone – proof of the growth in the cruise industry …

Also due in April is the Carnival Vista, which will have a suspended cycling experience called SkyRide, cruising’s first IMAX Theater and the line’s first on-board brewery. The Vista will be the largest ship in the Carnival fleet with a capacity of 4,000 passengers.

The AIDAprima will be the third April delivery – and the new flagship for AIDA Cruises will actually float on a cushion of air!, A new air lubrication system will pump bubbles below the waterline, reducing friction and lowering fuel consumption. The ship also features a transparent dome to hang out by the pool regardless of weather, and a new AIDA Mini Club, which will provide childcare for kids six months and up.

Finally the Seabourn Encore is due for delivery in December – which will carry 600 guests in suites which all feature a private veranda. There will also be close to one staff member for each guest on board.