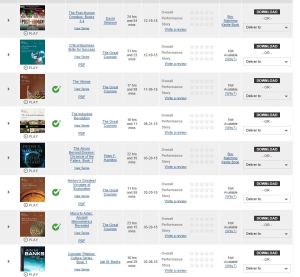 I’ve been a customer of Audible, on and off, since I don’t know when – and  I mean that literally.

My current subscription dates back to 2013, but I can’t remember when I first opened an account.

All I know is that it was long before Amazon bought the company in 2008.

In fact, I can remember that some of my regular downloads were unavailable in the weeks after September 11, 2001 – so I was obviously a customer way back when…

So it amuses me how ‘the more things change, the more they stay the same’.

For those unfamiliar with Audible (check out a free trial here), it is primarily an audiobook service. But note that I say ‘primarily’.

If you look at the screengrab here you’ll see that of my eight most recent purchases, only three are actual books – the other five are ‘Great Courses’ lecture series – each consisting of 24 to 60 lectures on the chosen subject. For which I pay the princely sum of $15US/mth.

I am also entitled to a daily subscription to the audio version of the New York Times – but no longer to the LA Times, which is a subscription I had a long time ago.

What’s interesting is that the reason I first subscribed to Audible was to get those newspaper subscriptions – and also access to some NPR programs like “Wait, Wait – Don’t Tell Me” – a quiz show about current affairs which is amazingly funny at times.

These days, or course, those NPR podcasts are available directly – so I don’t use Audible to get them. But that was one of the things that first brought me to the Audible service.

Which is why I was amused to see a Bloomberg article this week saying that Audible is looking to add ‘exclusive’ content from Public Radio in the US, as a selling point.

The article says, in part, “Audible has recruited well-known comedians, along with radio and podcast producers for the initiative, and job postings suggest a significant global push .. Amazon’s .. original films and TV shows have won critical acclaim and helped increase the appeal of its $99-a-year Prime service. “Amazon is doing to Audible what it’s done to Prime Video — investing in original programming,” said Nick Quah, an executive at the Graham Holdings Co.’s Panoply podcast network .”

It goes on “Podcasts and other radio programs are a sweetener for existing members and to entice new ones. … Eric Nuzum, a former NPR executive, is overseeing development and production of original programming for Audible. He has hired producers from WNYC, a New York public radio station, and the show “Fresh Air.”

It strikes me that this is a clever move by Audible. While existing podcasts and shows are easily accessible, if it can come up with new and exclusive content that is engaging, it may well have a winner on its hands.

Having said that, it’s not the first time that Audible has tried this … I seem to remember a comedy series featuring Greg Proops back around 2000 which I subscribed to, for a while. The problem was that Proops comedy is a bit ‘one-note’ … and after about three or four of the 10-minute segments, I moved on.

So its up to Audible to come up with something that makes it worth the while of a potential new audience. But it’s owners, Amazon, have had some success in the field (Black Sails, Man in the High Castle) so it augurs well.