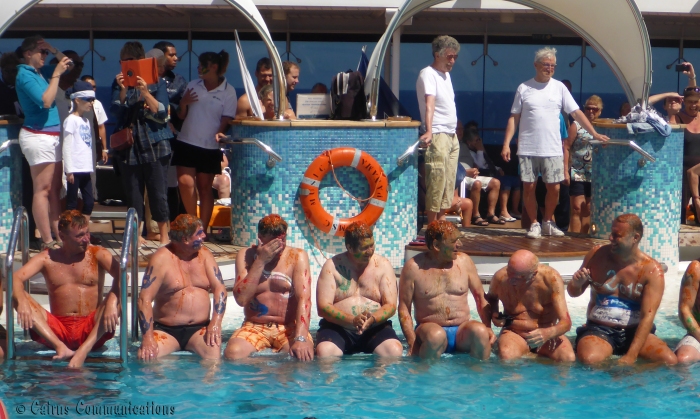 The theme for our ‪‎travel pics this week is O for On-board Images.

These fine specimens of manhood (with me in the middle) are taking part in a ‘crossing the line’ ceremony on the MSC Musica.

Now, traditionally the ‘Line’ in Crossing the Line ceremonies is the Equator – but since this voyage (from the West Indies to Venice) was all in the Northern Hemisphere, an alternate tack was taken (if you’ll pardon the pun).

The voyage involved six straight sea-days crossing the Atlantic and on day three we had this ceremony – which involved kissing a large fish held by a passenger in a mermaid costume, doing a dance around the pool deck covered in water-colour paints, and having a variety of foodstuffs smeared over our heads – including spaghetti sauce, cocoa, and flour paste.

Then we all jumped into the pool – which instantly turned the most hideous brownish-red colour.

But hey, it was a lot of fun for the 50 or so of us that took part (all men apart from two brave women) 🙂