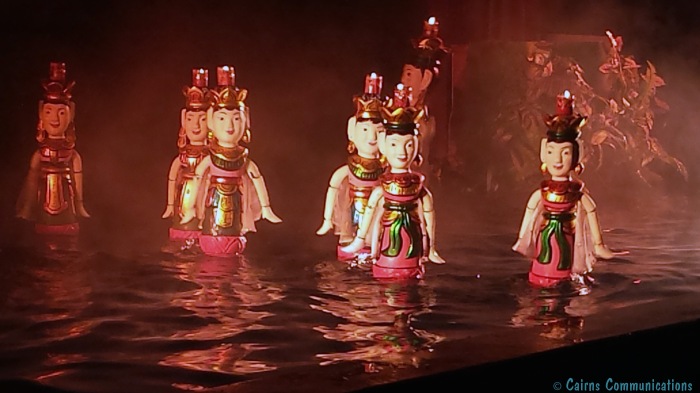 The theme letter for our ‪‎travel pics this week is V, for Vietnam.

Day two takes us to Hoi An, in the centre of the country.

In Vietnam, there is a specific artform known as water-puppets.

These Múa rối nước, or “puppets that dance on water” date back to the 11th century as bored farmers, unable to work when their rice-paddies were flooded, would stage these performances to keep each other entertained.

An impromptu pagoda would be set up, and the puppeteers would stand in waist-deep water behind bamboo screens, operating puppets that weight up to 15 kilos on long wooden beams underwater and with a series of ropes and pulleys.

These days the plays are performed in more structured facilities – including a brand new setup at Hoi An.

Unlike similar theatres in Hanoi and Ho Chi Mihn city, the Hoi An show features a brief introduction to each segment in both Vietnamese and English – so foreigners have an idea of what’s being represented.

Of course, some are easy to follow in any case – like the boat race segment or the dance of the fairies.

But for others, like the Chinese, Vietnamese and Japanese warriors joining to fight the sea-dragon, an explanation came in really handy.