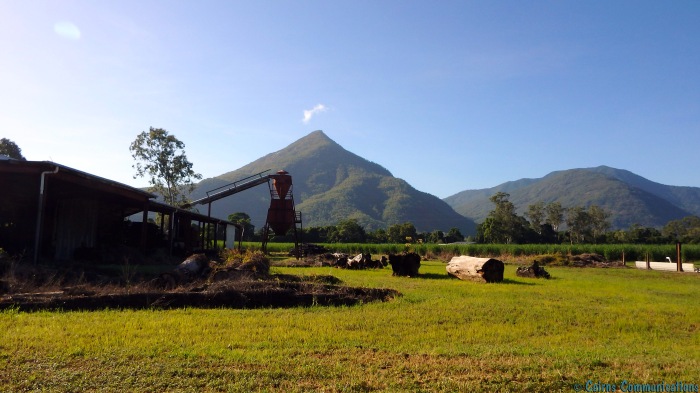 This week’s Travel Pics theme is A for Australia – and we head north, to the town of Gordonvale, about 30 minutes south of Cairns.

Originally a separate town, it’s now effectively the southernmost suburb of Cairns city – but retains its rural roots, including the Mulgrave sugar mill in the heart of the town.

Opposite that mill is a small museum dedicated to the region’s pioneers, plus a war memorial and park with picnic areas and barbecues, used by visitors and locals alike.

That war memorial is especially poignant – more than three thousand American paratroopers were stationed in Gordonvale during World War Two, and trained there for their missions in New Guinea.

Gordonvale has some other claims to fame, of course .. it’s where the first cane toads were released in a futile attempt to kill off the cane beetle.

The cane beetle can climb – unlike the introduced ‘bufo marinus’. But what bufo lacked in beetle-eating capacity it made up for in sheer fecundity .. the spread of the cane toad became an ecological disaster that is still being felt, with cane toad infestations now half a continent away, killing native animals and domestic pets alike.

The other feature of Gordonvale is Walsh’s Pyramid, seen here.

It’s a 922-metre high peak which is the site of an annual footrace attracting nearly 200 endurance runners from around Australia and overseas each August.

They can have that .. I’m puffed just thinking about it 🙂

One thought on “Travel Pics Theme: A for Australia”