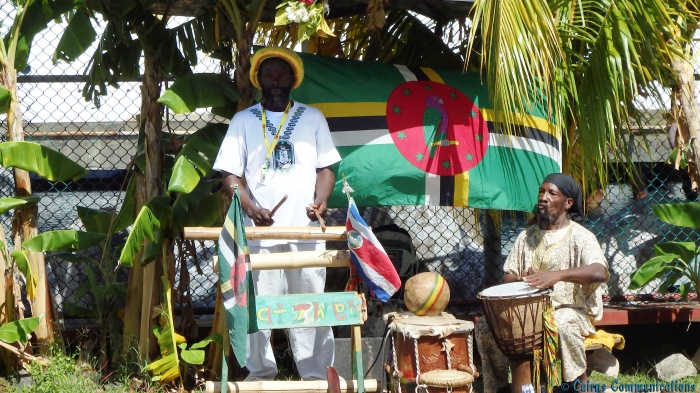 This week, our Travel pics series is D for Dominica.

Dominica is an island country in the Caribbean; also known as Dominique in French, or Wai’tu kubuli in the local Island Carib dialect.

Anyway, we were there in April 2015, four months before the disastrous Tropical Storm Erika ripped across the island, killing dozens and leaving hundreds homeless.

We were only there for a day, on a cruise through the Caribbean, and as we alighted we were greeted by an enthusiastic duo of local musicians .. who played typically tropical tunes (with lots of reggae influences) all day.

We could hear them from the ship, from the wharf, from the wharfside markets, and from the bar and cafe next door (where we stopped to use the WiFi, and upload Facebook posts and emails 🙂

Their music was a different style to the steel pans of Trinidad and Tobago, to the south, but it’s clear that they share musical roots … not surprising since Trinidad and Tobago were colonised by French Creoles from Dominica and nearby islands.

Anyway, musicology aside, they may not have been the most skilled musos I’ve ever heard – but they were, as I say, enthusiastic, and made the stark, hot, concrete wharf quite a bit more enjoyable.