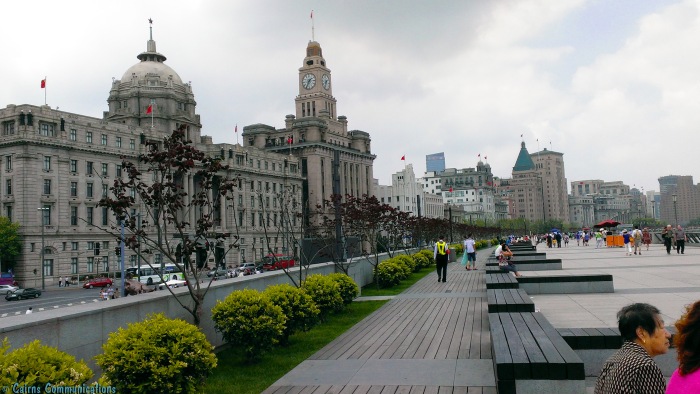 This week, our Travel pics series is E for East Asia.

Friday’s image is of a streetscape that looks like it could be in any European city – except that is it, in fact, in Shanghai.

The Bund is an embankment, or quay, along the banks of the Huangpu River, which runs through Shanghai.

It’s made up of dozens of historical buildings – but rather than being of traditional Chinese design, these are classically European – because these were all built as part of the International settlement that was established after the First Opium War.

As well as ceding control of Hong Kong to the British, China was forced to allow Europeans to settle in what were called Treaty Ports – areas where Foreign governments effectively overruled local laws and customs, in favour of European ones.

Eventually, there were more than 80 Treaty Ports in China – but Shanghai was one of the first, and certainly one of the most vibrant.

When the Japanese invaded China during World War Two, the last of the Europeans were effectively expelled – and then when the Communists came to power in 1949, the Treaty Port era came to a permanent end.

The banks, and hotels, and clubs were converted into Government offices for a time – but by the 1980s the financial institutions and hotels had returned – and the Bund was further revalitalised as a tourist area within a decade – it remains one of the most popular tourist spots in Shanghai.

One of the things that makes it so popular is that while on the western, Bund side of the river, the buildings are all stately colonial-era ones .. on the other (The Pudong – or ‘East Bank’) some of the most startling, innovative and downright impressive new skyscrapers have been built – along with a Disney resort, the International Airport , high-tech parks, and one of the most important financial centres in Asia.

The wharves of the Bund (and of the Pudong) have almost all gone – but you can still take pleasure-boat rides along the 1.5km stretch of the river. These are very popular, especially at night, because both the Bund and the Pudong are lit in spectacular fashion – and the contrast between the Neo-Classical buildings on one side and the Hyper-modern structures on the other is quite breathtaking.