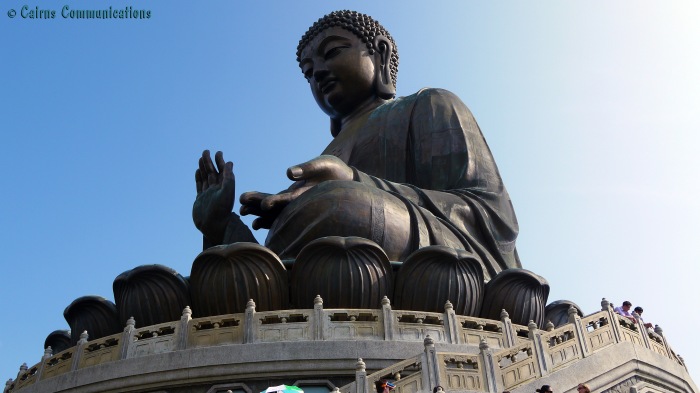 This week, our Travel pics series is E for East Asia.

When we were in San Francisco the first time (stay with me, this is relevant), we went to the Asian Art Museum – and it used the spread of Buddhism as a chronological guide to the artefacts on show.

Amongst other things, it showed just how big an impact Buddhism has had on the whole Asian region – from its birth in India through North Asia (Vajrayana tradition), South Asia (Theravada) and East Asia (Mahayana)

While Westerners often think of China’s religious tradition as being primarily Confucianism and Taoism, the impact of Buddhism can’t be overlooked – it is, after all, one of the “three teachings” that was the philosophical underpinning of Chinese life for more than a millenium.

In Hong Kong, Buddhism is quite strong. For example, on Lantau Island, there is a major monastery (the Po Lin) – and next door, the Giant Buddha of Tian Tan.

This 35-metre-high, 250 tonne bronze statue dominates the area, and comes atop 270-odd steps – with a three-story-high area below, each story representing the Universe, Benevolent Merit and Remembrance.

Inside there is a reliquary containing what are claimed to be remains of the Buddha – but you can only get in to see that if you make a purchase of an offering.

To access the Buddha, you can either go by bus, or by taxi – or by the Ngong Ping 360 Cable-car Gondola, a 25 minute ride high above Tung Chung, beside the Hong Kong International Airport, and then over Nei Lak Shan, one of Hong Kong’s highest hills.

For a few dollars more, you can get a cable car gondola with a glass floor – allowing you to also see the hikers who trek up to the monastery and statue – a hike of up to 5km, and climbing nearly 700m.

The statue itself was built in 1993, and is one of five Giant Buddha statues in China – and the only one to face North, rather than the more traditional south-facing visage.