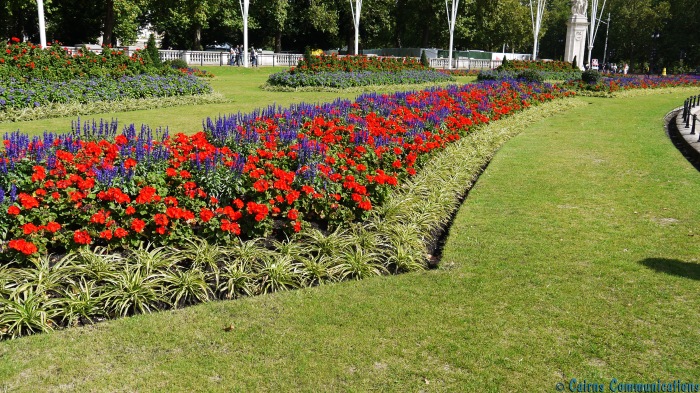 This week, our Travel pics series has been G for Gardens.

The final image in the series comes from London.

St James’ Park is one of eight ‘Royal Parks’ in London, and stretches from Buckingham Palace to The Mall and The Horse Guards.

It has a lake, islands, waterfowl, and flowers aplenty – bed after bed of flowers. Depending on the time of year, there are snowdrops, and daffodils, and cherry blossoms, and geraniums, and violas, and a thousand little bursts of colour.

As a kid, I always dreamed of getting to London – but it wasn’t until my son Alan went to England to work for two years that Shirley and I finally took the opportunity.

We only spent a few days there, because we wanted to see other parts of England, Scotland and Wales – but the few days were actually quite magical.

We not only caught up with Alan, who we hadn’t seen for a year, but also our daughter Lyndal (who was, coincidentally, ending her European holiday two days after we arrived!)

We spent a day wandering the gardens of London, and it was quite amazing – with squirrels, and swans, and flowers, and flamboyance.

We wandered through Bayswater, and Kensington Park, and Hyde Park, and Green Park, and ended in St James – one of the oldest, and most famous.

Of course, much of its fame comes from its infamy – for many years, St James Park was as well known for its lechery as its legendary flowers.

But these days, it is a much safer, cleaner, more ‘wholesome’ place … and if the weather is kind, it should be on every visitor’s path.