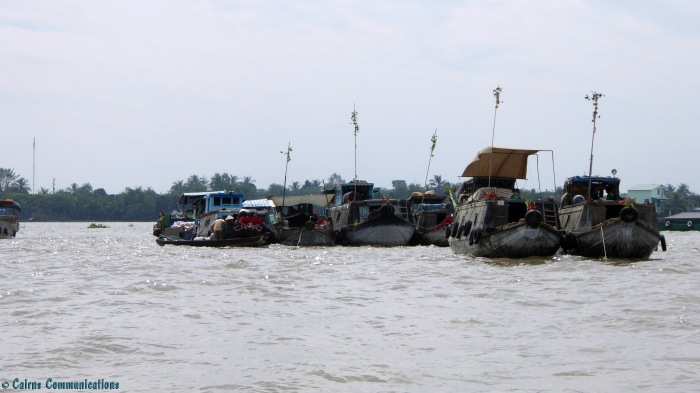 This week, our Travel pics series is H for Ho Chi Minh City.

Well, actually, this is about 100km from HCMC, at Cai Be, in the Mekong Delta.

The very term “Mekong Delta” conjures up visions of intrigue, and danger – and of beauty and excitement, and a dozen other emotions mixed together – for many westerners.

That’s because we heard about it in newspapers, and on the nightly news, and in spy novels and in pulpy men’s magazines.

But for 17 million people, and for literally thousands of species, the Mekong Delta is home.

It is the largest fishery for Vietnam, and its sodden lands make up a quarter of Vietnam’s agricultural production – especially rice production.

So its no surprise that for many who live on the Mekong river actually live ON the Mekong – on boats and barges and other floating communities.

That’s particularly true of traders who conduct daily floating markets in places like Cai Be.

You can visit ‘Floating Markets’ in a variety of locations across Asia – but most are largely for tourists – whereas the Mekong floating markets are really only for locals.

Because the markets (like most markets around the world) are at their busiest early in the morning, and because the Mekong markets are hours away from Ho Chi Minh City, you’d need to be heading out around 4am to experience the hustle-and-bustle.

Instead, many tour companies include a boat ride through and past the remnants of the market, however, as part of a day trip from HCMC to the delta.

That’s where this picture was taken – at Cai Be

The town is about 100km from HCMC – that’s less than the distance between the Gold Coast and Brisbane – a one-hour drive in good conditions.