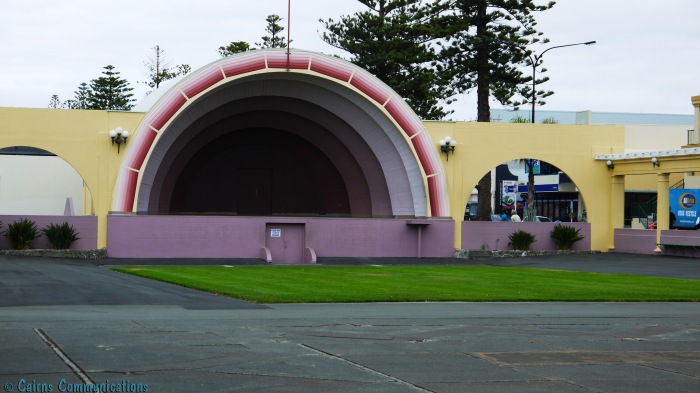 Sound shells at seaside resorts aren’t new – they are as old as the holiday trade – but Napier’s sound shell looks more California than Clacton-on-sea.

That’s because this, like much of the New Zealand town, was built in the Art Deco style after the 1931 Hawkes Bay earthquake.

It was built by the Thirty Thousand Club – a group of influential locals who (in 1913) decided they wanted Napier’s population to reach 30,000 – and who then spent the next three decades tirelessly promoting the region.

In the wake of the ’31 quake, when the national Dominion newspaper said that “Napier as a town has been wiped off the map”, the Thirty Thousand Club decided that they, too, would move heaven and earth to rebuild the town – and show that the spirit of Napier was indomitable.

Part of that was to build a seaside promenade and sound-shell .. as Dr Robin Woodward says in ‘Cultivating Paradise’, “it trumpeted Napier’s intention not just to rise from the rubble and ashes of the earthquake and fires, but to reinvent itself in the process.”

It has three grand arches including the stage itself, a tribute to HMS Veronica (a Royal Navy ship that was in port at the time, and which led the rescue efforts), and an outdoor dancing area – which was paid for by locals who ‘purchased’ individual paving slabs.

It’s surrounded by lovely colonnades in a horse-shoe shape, and has garden beds of glorious coloured flowers between the sea on one side and tall trees on the other.

Even on a gray day like the one we faced on our visit, it was enchanting .. on a clear starry night, with jazz-bands playing and locals dancing the night away it must have been magnificent – and amazingly morale-building for the shell-shocked citizens.