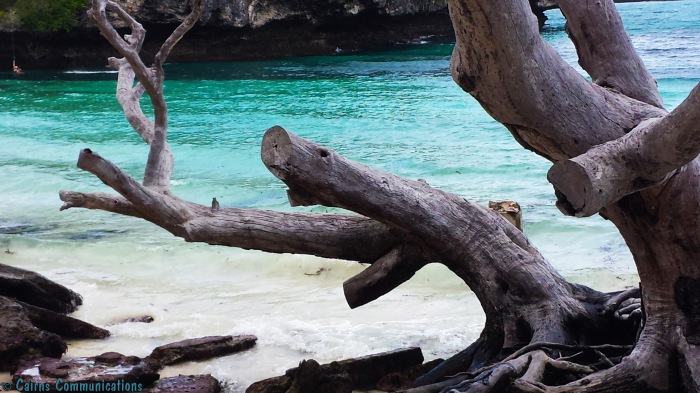 There’s a reason that the South Pacific has been a magnet for holiday-makers forever, it seems – and that’s because it can be so gob-smackingly beautiful.

Take the Isle of Pines (or Iles Des Pins in French – it is, after all, a part of New Caledonia.

The island (called Kwenyii in the local Kanak dialect) has around 2,000 residents – mainly Melanesian Kanaks. Like its sister islands in New Caledonia, it has a rich and storied history involving both local people and European influences.

It was named by James Cook, who didn’t stop – but spotted the island’s eponymous pine trees as he sailed past. Then, in the 1850s, it became a French colony, like much of the South Pacific. Since then, it’s been a penal colony, a small-scale agricultural site, and finally a tourist destination.

In fact, the Isle of Pines is a favourite stop for cruise-ships sailing from Australia to the South Pacific.

It’s also host to a Le Meridien resort and a handful of other guest houses and small hotels – but almost all of the visitors are day-trippers coming ashore from cruise ships, who spend a scant few hours on the island before reboarding their floating hotels and sailing away.

Many take advantage of the tours and excursions organised by the cruise lines – such as trips to the ruins of a penal colony established in the 1870s by France, to house prisoners deported after the brutal crushing of the Paris Commune.

The ruins are at the village of Ouro, on the western side of the island, and are considered a ‘must see’ by many, as is the village of Vao, home to the Notre Dame de l’Assomption Catholic Church.

Other attractions include natural caves, and craft village stalls, and the Piscene Naturelle, reportedly one of the best snorkeling spots in the South Pacific – but it was closed on the day we visited.

So we chose, instead, to swim and snorkel at Kanumera Bay – just 500 metres or so from the dock.

And even though it wasn’t the best day, weather wise, it was an extraordinary experience.

The waters were crystal clear, the sands were clean and bright, and while hundreds of tourists had disgorged from our ship (the Carnival Spirit), there was enough room that it didn’t feel crowded – unlike the cheek-by-jowl jostling that you often get at cruise destinations.

Of course, if it had been a sunny summer’s day (rather than a somewhat cloudy May) things may have been different – but we weren’t complaining.

The snorkeling wasn’t the best I’ve ever done – but there were plenty of fish, with riots of colour.

Kanumera Bay is very pretty, and has a small rocky islet at one side. Unfortunately, despite signs urging people not to climb on the ‘Sacred Rock’, some did – ignoring local tradition. You can glimpse some of them, through the driftwood that caught my eye as we wandered along.