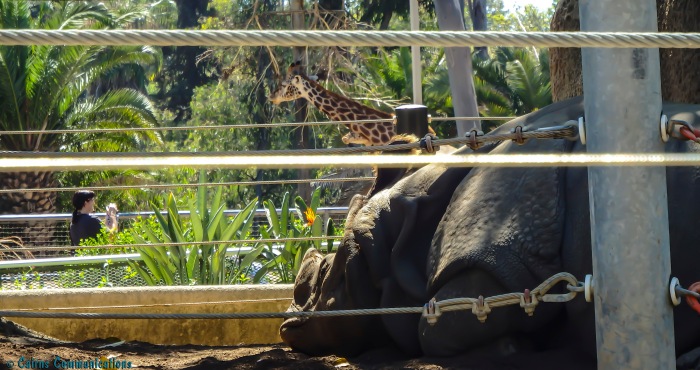 There’s a sad story behind the creation of the San Diego Zoo .. but I guess it proves that every cloud has a silver lining.

Back in 1915, San Diego played host to the Panama California Exposition – to celebrate the opening of the Panama Canal, and San Diego’s location as the first major (American) port-of-call after ships sailed westwards through that canal.

It cost the equivalent of 40 million dollars to build the exhibits – and left the genesis of Balboa Park – an  amazing resource for San Diego that I’ll talk about in a couple of days.

But it also left behind a whole swag of animals that had been brought in for the fair – and were simply abandoned afterwards.

That’s not unusual for the time, of course … modern attitudes to animal welfare were simply not on the radar at the time.

The story goes that Harry Wegeforth, a successful doctor and leading light in San Diego at the time, heard the plaintive call of a lion who was set to be destroyed when the exhibition closed.

His response was to say to anyone who would listen “Wouldn’t it be wonderful to have a zoo in San Diego? I believe I’ll build one.”

He formed the San Diego Zoological Society in 1916, and over the next couple of decades fund-raised for, designed, and operated the zoo in Balboa Park.

It was a pioneer in what is now standard – cageless exhibits – and to this day, most fences are just to stop humans from getting too close to the moats which actually separate the animals from their curious observers.

(Obviously, the aviary is different – although even this is much larger than most).

There are a series of hop on hop off busses that traverse about 3/4 of the zoo, and a chairlift (called the Skyfari) which crosses the zoo and allows passengers an eagle-eye view of the whole park.

The animals are all owned by the City of San Diego, but the zoo is run by a not-for-profit zoo society, and it has, as its highest aim, conservation and preservation of species – such as the Black Rhino.

In the early 1900s there were nearly a million Black Rhinos in the wild but today there might be as few as six thousand .. so conservation efforts are all-important.

Not that the rhino in our pic seemed all that interested in environmental issues.

He was just content to lay around in the dirt watching us watching him.

And I say HE because he was definitely, proudly male .. at one stage he urinated and it was like a fire hose emptying out a child’s swimming pool!

Behind, you’ll see a couple of giraffes, stretching their necks to grab whatever leaves were available.

At one stage, we spotted one giraffe licking a tall metal pole – it looked like a child with its tongue stuck on a frozen pole .. except that the tongue was half a metre long, and blue!