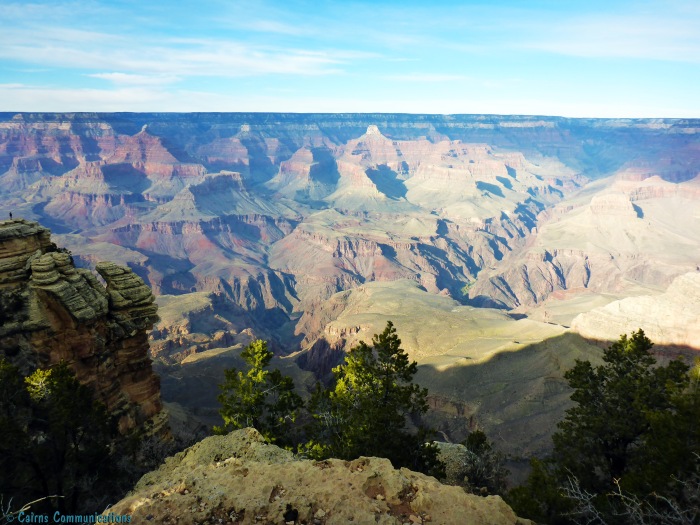 This week’s theme is U – for Undulations.

It might have been 6 million years ago that the Colorado River started cutting through the deserts of Arizona.

It could even have been as long ago as 70 million years ago.

But whenever it was it has left us with a natural wonder that is, quite simply, gob-smacking.

The major geological features include the 2-billion-year-old Vishnu Schist at the bottom of the Inner Gorge to the 230-million-year-old Kaibab Limestone on the Rim. Many formations were deposited in warm shallow seas, near-shore environments such as beaches, and swamps as the seashore repeatedly advanced and retreated.

But a river alone couldn’t have cut this deeply, surely? I mean, parts of the Grand Canyon are a mile deep!

Well, it turns out there was a mammoth uplift of the Colorado Plateau starting about 65 million years ago – and land that had been below sea level was raised to 3km above that.

The net result was that the Colorado River and its tributaries increased their speed and thus their ability to cut through rock.

Add the ice ages (and more importantly the glacial flows) and scientists say the final shape of the Grand Canyon was complete around 1.2 million years ago – apart from continued erosion at the sides, and the occasional volcanic eruption which ejected volcanic rock into the mix. (Don’t you love how Earth Scientists can be so blase about such monumental changes?)

The Ancestral Puebloans (formerly called the Anasazi) were the first people known to frequent the area .. their descendants, along with the people who became the Hopi, and the Navajo, and the Havasupai, and the Paiutes have all lived in or travelled through the Grand Canyon over the past three and a half thousand years.

Europeans didn’t come across the Grand Canyon until 1540 – and it was then another 200 years before they returned, and even then only sporadically.

It was 1900 or so before the Grand Canyon really entered into general knowledge … US President Teddy Roosevelt had fallen in love with the region, and he made it a National Monument in 1908, before Woodrow Wilson designated it as a National Park in 1919.

Today’s #Travelpic is from the South Rim, taken near the famed Bright Angel Lodge.