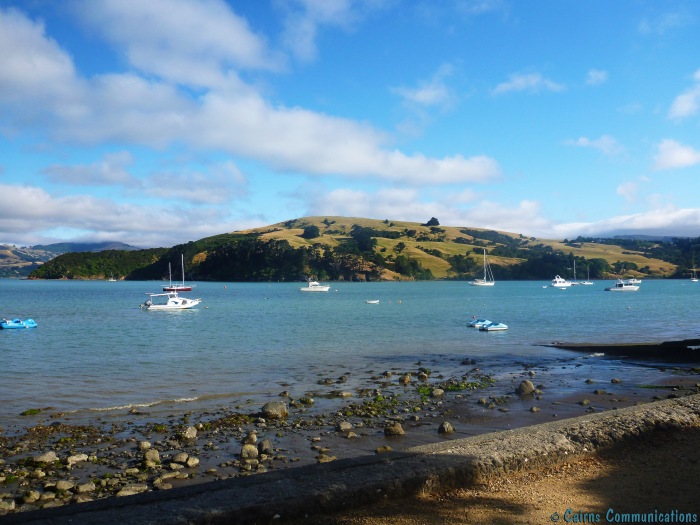 This week’s theme is U – for Undulations.

The town is on the Banks Peninsula in the Canterbury region of the country, and it’s where the cruise ships come in to visit Christchurch, around 80km away.

But Akaroa’s also a destination in its own right – home to attractions as diverse as museums and art galleries, penguin colonies and even what’s described as a ‘world famous mini-golf course’!

There’s little doubt the most popular attraction are the Hector’s Dolphins, small aquatic mammals that can only be found in this region.

50 years ago, there were as many of 30,000 of these dolphins – but today there are only a quarter of that number. They live in and around the murky waters of the Banks Peninsula – water that is an amazing teal colour, but which is so full of sediment that you can’t see more than a metre or two when swimming.

Despite the reduction in numbers, there are still quite successful businesses conducting swim-with-the-dolphin tours … but these are very tightly controlled. Swimmers are told in no uncertain terms not to touch the mammals, and not to swim toward them … it’s up to the dolphins to make contact, not the other way around.

Out of the water, Akaroa prides itself on its artistic and cultural heritage.

The name Akaroa is Maori for ‘Long Harbour’, and it was settled by British, Geman, and French settlers in the middle of the 19th century.

In fact, many of the street names in Akaroa are still in French, and there is a definite francophile feel to much of the village.

Like Christchurch, its larger cousin, Akaroa was damaged in the earthquakes of 2011, and there are still many signs in the village and surrounds forbidding entry to certain structures, or urging donations to repair them.

It also has a bustling local market, magnificent gardens, some fun and funky statues and art installations, and a friendly local population who welcome visitors all year round – but especially outside of summer, which is the peak tourist season.

There’s a fierce debate underway in Christchurch as to whether it’s worth their while to rebuild the Lyttleton cruise ship facility for the city – but in the meantime, Akaroa is quietly scoring goals with those ship passengers who don’t want to face the 90-minute-plus coach trip into and out of the quake-ravaged centre.