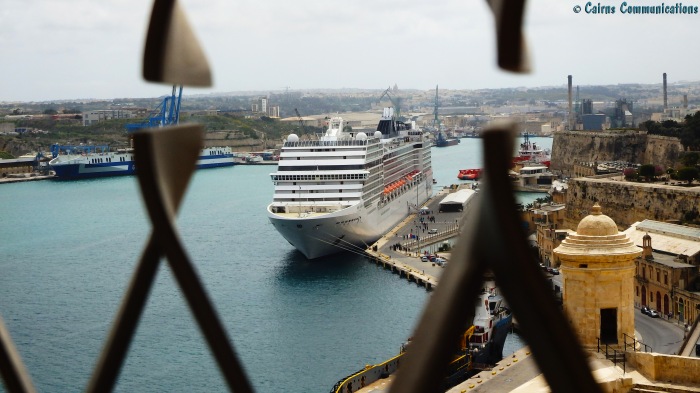 This week’s theme is V, for Valletta.

I remember once being told that “You don’t want to see how sausages are made, or you will never eat another snag!”

Well, today you get to see how the sausages of our #Travelpics photos are made.

The pictures we choose are all from those shot by either me (Graham) or my wife (Shirley).

The words are always written by me – after all, I’m the professional journalist in this relationship – but the ‘cleaning up’ of the images (mostly just a light touch-up in Photoshop) are done by Shirley.

We’ll go through our images, and decide on about 10 or so – and then I choose the final seven (since I have to do the research and write up the articles)

Which occasionally leads to Shirley asking “This picture? Really?”

Today’s picture is one such example 🙂

This is an image of the MSC Musica, which we were sailing on in April of 2015.

She had tied up at the wharves in Valletta, and we had caught a taxi up to the town, which is high above the passenger terminal protected by walls and bastions and curtains – what are called the Floriana lines.

After wandering around the town, we decided to return to the ship, via a 60-metre-high elevator from the Upper Barrakka gardens.

But then in 2012 a new, modern steel-and-glass structure was installed.

I don’t know how long the upward journey takes but the downward journey is a bit under 30 seconds .. long enough to go ooh, and aah, and to spot our ship framed by a break in the twisted metal mesh.

Actually, I’m not sure what to call that mesh – it’s obviously there for protection: protecting those inside the glass lift and also protecting those below from jumpers and things being thrown.

And the twist is like a security fly-screen door – pretty enough, but certainly not like the wrought-iron cage that you might have seen on the 1905 version 🙂