This post is a day late, because we’ve only just got back from a cruise though the South Pacific on the Sun Princess, and the internet coverage on the ship didn’t lend itself to blog posting 🙂

But as always, we had a blast. And part of the fun was the huge range of eating options.

For those who have never been on a cruise, there are normally a variety of options available for meals – notably the buffet, the main dining room, and the specialty restaurants.

Each has its pros and cons, and I’ll look at each. 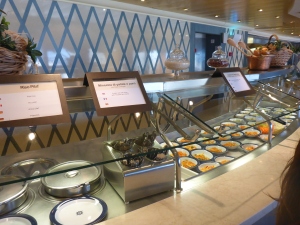 The first option (and the one you normally have to use on boarding day) is the buffet, usually up near the pool deck, and open from very early until very late.

The range of food is quite good (and often includes many of the menu items from the main dining room) – but like all buffets there are some down-sides.

The first is that when they get busy, they get very busy – and finding a table (and your travelling companions) can be a problem. This is especially true if you are in a group of four or more.

It is much easier for a couple: you just spot another couple with two spare seats, and ask if you can join them. 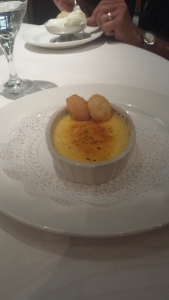 Once that’s out of the way, you face the second problem with buffets – the temperature of the food.

Because the food has been kept in a hot-box or Bain-marie, it’s not likely to be very hot to start with. And then while you are searching for a seat, it’s cooling further. So by the time you get to your meal, it’s likely to be lukewarm 😦

One solution? Get a soup first, because it will remain hot while you search for a seat. Then, when you have finished that, return to the buffet for your main course (read ‘entrée’ for Americans). Since you already have a seat, that step is no longer an issue 🙂

You can normally get tea and coffee, chilled water, and (depending on the cruise line) lemonade, iced tea and juices free with your buffet meals, and waiter service is available for alcohol and specialty coffees at a cost.

Speaking of “at a cost”, the second option for dining on-board cruise ships is specialty restaurants. 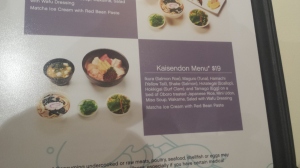 These are an “added cost” option and normally include sushi, pizza, and steak restaurants. The cost is generally relatively small because approximately $15 has already been amortized by the fact that you won’t be eating in the main restaurant or buffet. This means a prime steak dinner which might normally cost you around $40 should be available for about $25 in a steakhouse restaurant on board.

On our most recent journey we had a Kaisendon set in the sushi restaurant for $19 each. This sashimi-on-rice wasn’t your traditional Sushi Train fare, and I would have expected to pay at least $30 each in a halfway decent Japanese restaurant.

On an earlier cruise, Shirley and I ate at the Salt Grill (on board the Pacific Dawn) and from memory, that cost us around $50 each … a land-based version of Luke Mangan’s famous eatery would set us back around $150 each, so we considered it well spent 🙂 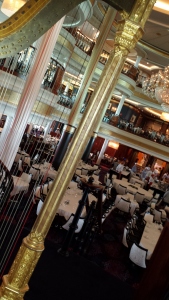 But many travellers ask “why would I pay extra, when I get silver-service dining in the main dining room as part of my fare?”

And that’s a fair question – because the main dining rooms on board cruise ships are generally equal to a good mid-market restaurant. They aren’t like dining in top-flight restaurants – but the service is as good as a good hotel, and the food is (generally) top notch.

The size of the meals depends, in part, on who you are sailing with. We found, for example, that the portion sizes on the MSC Musica were ‘just right’ .. enough to slake the appetite, but not so much that you felt like going into a food coma. But the most recent cruise, with Princess, saw some plates go back with up to a third of the meal uneaten – not because it wasn’t delicious, but because the portion was just too large. 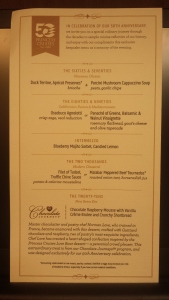 Normally, you will be offered four courses, with three choices each day in each course – plus up to three choices that remain constant across the whole cruise. So that means that you get a half-dozen choices in each of four courses – and if you want, they are happy to give you more than one of each (I know I couldn’t decide between two desserts this week, so the waiter brought me both!)

Talking of the waiter, the wait-staff on cruise-ships are a mixed lot – but the mix generally runs from good to excellent. 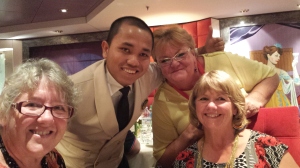 MSC Musica waiter Ferry, my wife Shirley,  and my sisters Lorraine and Maureen.

Friendly, observant, and always with an eye to making your dining experience as good as it can be, these staff may have up to half-a-dozen tables to wait on – some of which could have up to 10 diners.

The senior waiters almost always have excellent English (even though it may well be their second language) but the junior waiters tend to be a little less skilled.

Even so, I’ve never yet had what I would call an unsatisfactory experience (apart from the fact that they want to kill me by over-feeding 🙂 ) 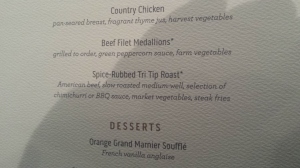 And after this most recent cruise, I have nothing but good things to say about our wait-staff – Romano, and his offsider Egy – or about the excellent meals.

4 thoughts on “Eating on a cruise ship.”