I mentioned earlier that we cremated my 91 year old mother today.

Here’s the eulogy that I wrote, to help celebrate her life.

It’s an old fashioned concept, but in a lot of ways Marj Cairns (mum to the four of us)  epitomised sacrifice.

Her whole life she was one of those people who just ‘mucked in’ and did it.

From her service in the RAAF in World War Two, to her role in the Order of The Eastern Star, mum was always one of those people who got involved.

Of course, she then tended to take a  .. well, let’s call it a leading role .. in almost everything she did.

And it was that indomitable will that made her the undisputed matriarch of her family.

Marjory Irene Cairns was born as little Marjie Bowen in 1924 … and she spent her childhood years in Yanco, a village near Leeton, in NSW .. a village that takes its name from the local Aboriginal word for “the sound of running water”.

The third of five children, mum was, by all accounts, an irrepressible child with a wicked sense of humour – and an unquenchable thirst for knowledge.

That would later emerge in her formidable passion for Trivia (some old timers here will no doubt remember the Trivia nights that she would organise at the RSL dating back 20 years) but I was always amused by another sign of her thirst for knowledge .. the way she and her brothers, in particular, would somehow manage to get copies of the Melbourne Truth.

Back in those days it was a shocking scandal-sheet, and mum would apparently be at turns excited and appalled by the salacious stories of divorce, and infidelity, and other big-city peccadillos!

Then, after a relatively idyllic childhood, war came to Marj’s generation.

Her older brother, Stan, had signed up early in World War II, as had her older sister, Kitty – and so did Marj, when she could.  She  was a chubby-cheeked young RAAF servicewoman – getting paid the absolute fortune of 4 shillings and 4d according to her pay-books, which we found this week when we began the sad task of sifting through her life. 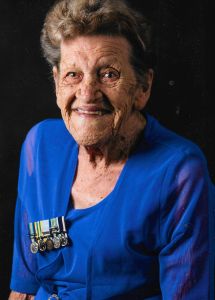 In fact, her photo, behind me, and some details of her service, were part of an exhibition at the War Memorial in Canberra.

After the war, mum led the life of many young women in Sydney – working, and dancing, and movies … talking of movies, Marj later told the story of going to see a newsreel and seeing a segment on the silly things that people do.

One was a young woman who inadvertently got off a tram on the wrong side and had to stand stock still while another passed. As the audience laughed at the woman’s ineptitude, mum says she slinked shame-faced out of the theatre … because it was her!

But I also mentioned dancing – and that was mum’s great passion during these years. That is, until she came home one night and said she was going out, for a second time, with a young sailor she had met – a man who didn’t dance!

That man of course was Brian Cairns – and many of you here today were here when we  held a similar service for him, just three short years ago.

I know that mum still missed dad immensely – in fact, just a couple of weeks ago she was telling my wife Shirley and I about how she still, often, saw him walking down the street and wanted to berate him for leaving her.

So I guess (sad as today is)  we can take comfort in the fact that soon their remains will be side-by-side again at the memorial wall outside.

But as I say, mum was always one to volunteer – and then in many cases ‘take charge’.

Over the years, we saw her get involved in P&C Associations, sports clubs, dancing schools and RSL Auxilliaries.

Now, she wasn’t always the most _serious_ of volunteers .. I can remember the year that the local soccer club’s Womens Auxilliary was challenged to a match by the next suburb’s women’s’ group. The opposition came out ready to play soccer. I’m not sure what Mum’s team were playing … but it wasn’t soccer as we know it. Mum’s role, for example, was to rush around with tissues, in case any of her opposition were upset at the amazing prowess that was the South Sydney Hakoah Women’s Auxiliary Team.

They lost, in case you were in any doubt.

But mum’s real volunteering phase came later in life, after she had given up full-time work.

She once told me that she had never worked as hard as she had when she was retired – because the volunteer work became all-consuming.

From the Citizens Advice Bureau to the Red Cross, from the CWA to Toastmasters, mum entered into everything with gusto – and had a tendency to … put her stamp on everything she did.

She also was quite certain of her own mind, and often took things into her own hands – mostly for the best – but even if she was at times abrasive, you never had any doubts.

Over the years, mum lived in small country towns, and capital cities, on farm acreage and in cozy villas.

She went with Dad as he was posted to various naval establishments – in country NSW and Perth in WA, and then back across the nation to Sydney and up to Brisbane – and then she moved here to Innisfail to open the brand new Medibank office (as Medicare was then called).

Initially only for a month-long secondment, it became obvious that Innisfail was to claim Marj’s heart – and after Brian joined her here, she never strayed.

Oh, they took a number of driving holidays around the nation – but there was no doubt in any of our minds that for Marj, this small town on the quiet banks of the Johnstone was her home.

Everywhere she went, the kitchen table was the heart of Marj’s domain, from where she held court.

As a young mum, Marj would often enclose herself in a children’s play-pen to do the ironing, or the cooking – giving herself space from the four children who were her satellites.

And she did enjoy a night out, later, when we were old enough to behave ourselves (well, mostly, anyway).

But mostly, the kitchen table was her domain .. dispensing advice, and lessons, and laughter, and life.

Here’s a poem chosen by Lyndal,  her Grand-daughter ..
———-
PERHAPS THE WORLD ENDS HERE

BY JOY HARJO
The world begins at a kitchen table. No matter what, we must eat to live.
The gifts of earth are brought and prepared, set on the table. So it has been since creation, and it will go on.
We chase chickens or dogs away from it. Babies teethe at the corners. They scrape their knees under it.
It is here that children are given instructions on what it means to be human. We make men at it, we make women.
At this table we gossip, recall enemies and the ghosts of lovers.
Our dreams drink coffee with us as they put their arms around our children. They laugh with us at our poor falling-down selves and as we put ourselves back together once again at the table.
This table has been a house in the rain, an umbrella in the sun.
Wars have begun and ended at this table. It is a place to hide in the shadow of terror. A place to celebrate the terrible victory.
We have given birth on this table, and have prepared our parents for burial here.
At this table we sing with joy, with sorrow. We pray of suffering and remorse. We give thanks.
Perhaps the world will end at the kitchen table, while we are laughing and crying, eating of the last sweet bite.

We have, as a family, spread far and wide.

These days, Doug and Lorraine live here in the north, while Maureen and I have lives in Brisbane – but over the years we’ve been as far apart as South Australia, the rugged WA outback, Canberra and Sydney – and yet the centre of our family has always been Marj.

With her passing, that PHYSICAL centre is hollow – but in our hearts, she will always be there – the matriarch at the heart of us all.