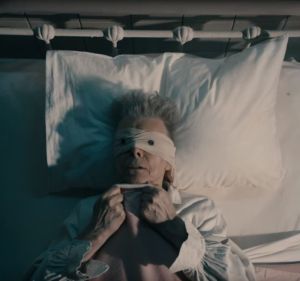 I’ve been listening to David Bowie’s new album, Blackstar over the past couple of days, and I have to say – it’s like nothing he’s done for years.

Bowie’s one of those unique creatures, who can keep reinventing himself.

This current album’s been described as bleakly noir, and inaccessible, and evocative, and introspective.

But its also been described as contrived, and pretentious, and just plain weird.

And its all of those things.

But most of all, it’s thought-provoking.

From the relatively ‘pop” Lazarus (I did say “relatively”) … to Girl Loves Me – which mixes incomprehensible English lyrics with ‘Polari’ (a slang used by circus performer, criminals and a gay subculture) and ‘Nasdat’ (the language invented for A Clockwork Orange), this album is nothing if not complex.

In fact, trying to unpack it may be deliberately impossible: in I Cant Give Everything Away, he sings “Saying no but meaning yes, this is all I ever meant, that’s the message that I sent”.

And as for ‘Tis A Pity She Was A Whore’, this is a piece where he blends experimental jazz with R&B in a discordant mess that you will either make you go “Wow”, or make you go “Ow!”

As I say, this is like nothing Bowie’s done for years. And I’ll have to listen multiple times before I finally decide whether he is a musical genius, or a flawed genius.

But either way, genius he is.

The whole album’s available on Youtube, by the way, at Bowie’s Vevo channel

ADDENDUM:
I wrote this piece just before Bowie’s death by cancer was announced, and in the 12 hours since, I’ve been wondering about the album’s lyrics, in the wake of that.

It’s obvious that  much of the album was about unresolvable questions about life, and death.

The album is full of lyrics like Blackstar’s “Something happened on the day he died; Spirit rose a meter and stepped aside. Somebody else took his place, and bravely cried..” or from Lazarus “Oh, I’ll be free Just like that bluebird, Oh, I’ll be free Ain’t that just like me?”

I had taken them to just be the questions that any intelligent man approaching his 70s would ask  .. but what if this was Bowie’s sly nod to us, before we knew of his impending death? Was it his way of saying “I know my time is nigh – and now, so do you”?

Or maybe it was a thumbing his nose at the universe, a giant “Up Yours!” .. To quote from Dollar Days, “If I’ll never see the English evergreens I’m running to It’s nothing to me”

As I said in my review – “trying to unpack it may be deliberately impossible.”

Vale, David Bowie – you were an integral part of my life, from adolescence to retirement.