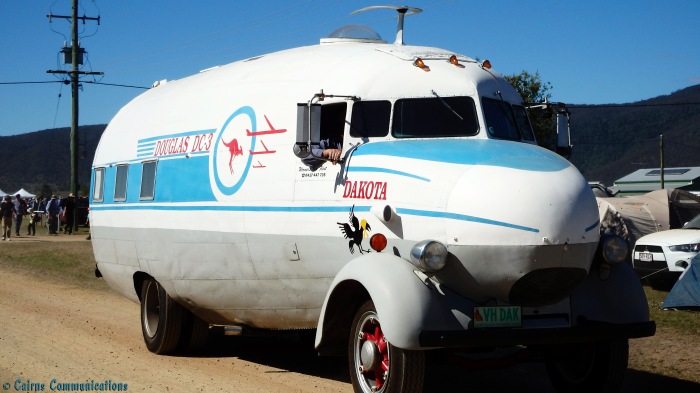 This week, our Travel pics series is J for Jets.

It’s a bus, made from the fuselage of a Douglas DC3.

The DC3 was actually a propeller-driven aircraft, rather than a jet, but it was pretty much the bus of the airways in the 30s and 40s  and while commercial production ended in 1942, the aircraft remained in service right through the 50s and 60s.

Some estimates are that there are still as many as 400 DC3s – or their military equivalent, the C47 (Dakota) – flying world-wide.

Of course the majority of the 16,000 planes are no longer in the sky.

But a surprising number of them are still in use on the ground – as converted caravans, or as diners, or on poles, or as playgrounds.

And for some reason, Aussies have taken to converting them to busses and other ground transportation – like the Werner Fun Fleet’s ‘Music Bus’.

This particular aircraft was a military variant – a C47 skytrain – and crashed near Darwin in 1947, after flying for the Dutch Indies Navy.

It’s now based at Samford, in Queensland, and  in a peculiar twist, it now contains a Fairground Organ, a Pianola, and a mechanical accordion.

Why? Well, who needs a reason 🙂