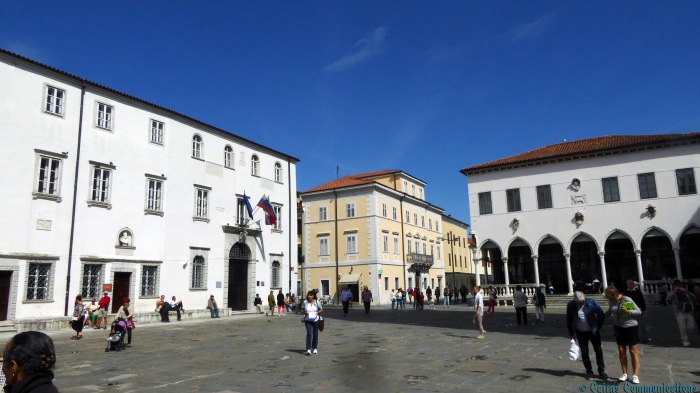 This week, our Travel pics series is K for Koper.

As mentioned, Koper is in Slovenia .. it dates back to the times of the ancient Greeks, when it was known as “Goat Town” – it’s also been known as Justinopolis, and Capodistria – or “head of Istria”, from its days as the capital of Venetian Istria.

The city fell on hard times, however – especially in the 16th century when it was hit by multiple outbreaks of the plague – and by early in the 20th century there were fewer than 7500 residents.

Since then, it’s grown – partly because it is the only commercial port for all of Slovenia.

The Old Town of Koper features a couple of squares – including this one, which plays host to a  fountain, and a pub which served a wonderful meal of local sausages and was anything but the wurst meal I’d had in ages

In the narrow, brick-paved lane-ways leading away from the square, you’ll find small shops, and cafes, and taverns – and a fascinating little bookstore where I found myself poring over an amazing range of books – many of which were obviously pre-loved, and well-thumbed – as befits a bookstore in a town which houses the University of Primorska.