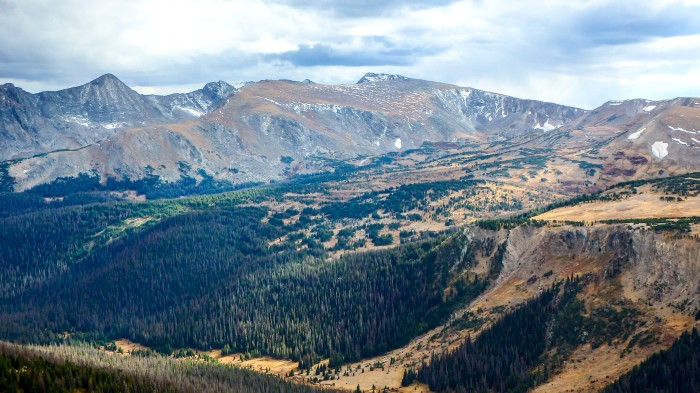 For the next six weeks or so, we’re on the road again – with a trip to the US.

On Sunday, Shirley and I spent much of the day driving through the Rocky Mountain National Park, which rises above Grand Lake in Colorado, and stretches across to Estes Park, and then down to Wild Basin.

To be honest, we only got about half way from Grand Lake to Estes Park along the Trail Ridge Road – but that was partly because we kept stopping at places like the Kawuneechee Visitor Centre, or at spots along the road take in the view, or take a mini-hike to the Holzwarth Historic Site (an early 20th century trout fishing lodge and homestead)

Our #Travel pic today could have come from any of these .. but in fact it comes from near the Alpine Visitor Centre – a cafe and shop at the two-mile-high-mark of the mountains .. and where there is a short climb to a nearby rocky outcrop where you can apparently get some amazing pics.

I say apparently, because as I started climbing the path to the outcrop, I started feeling quite dizzy and mildly nauseous – and that, marked with my shortness of breath from the lack of oxygen, made the climb seem .. inadvisable.

But nearby, there was yet another lookout – and already, as you can see, signs of some early snowfalls.

As it turns out, the forecast for nearby Granby (where we are staying) is for snow by Wednesday. But we’ll have left by then, on our way to New Mexico.

I’ll leave you with this thought – You remember when John Denver sang about Rocky Mountains High, Colorado?