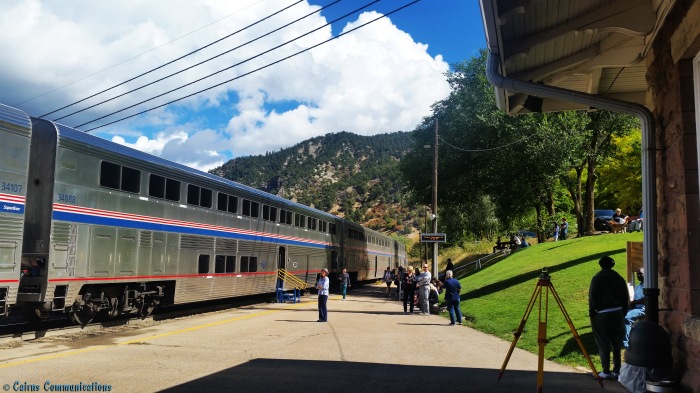 For the next six weeks or so, we’re on the road again – with a trip to the US.

I mentioned, the other day, that we had taken the California Zephyr train from San Francisco California,  to Denver Colorado – and thoroughly enjoyed it.

But I also mentioned that there were some traps for young players – and here are a few.

First up, the biggie: the time it takes.

You can fly from SFO to DEN in just a few hours – but it takes two full days to do the trip by train – and while the train was relatively comfortable, it can get a bit draining after a while.

Yes, you can get up and walk around, and yes, there is an observation car with large glass windows and spectacular views -..but there is only one such lounge car for 4 sleeper-cars and two coach-carriages, so seating can be at a premium – especially when volunteer historians are giving commentary about the area you are travelling through.

And the sleeperette option that I mentioned is a good compromise between price and comfort – but it IS a compromise.

Strictly speaking, you are allowed only two carry-on items per passenger – but generally, you can take on board whatever you can carry and fit in your room.

And when the lower bed is made up (ie the two armchair seats are combined into a bed) anything you have stored under there cannot be retrieved until the next morning.

On the subject of bunks, I chose the upper bunk (because Shirley would simply not have been able to get up there) – and it was relatively comfortable. But there’s that word again — relatively.

You are, after all is said and done, on a thin bed two metres above the floor in a swaying, moving carriage. There’s a sort of web harness which hooks into the ceiling to stop you falling out – but its still somewhat nerve-wracking. Also, its impossible to sit up on the top bunk – which makes getting up in the middle of the night for a wee a bit of a challenge 🙂

Now, don’t get me wrong – we would do this journey again in a heartbeat – but next time, we’d take less carry-on, more snacks (to avoid paying the horrendous price downstairs in the lounge car), and more electrical rechargers .. there’s only one 110v power point in each sleeperette – and NO WiFi anywhere on the train.

You get quite used to checking your cell coverage every time you approach a community – or maybe that’s just us: nerdygeeks anonymous!

Finally, the food isn’t five star – but its quite acceptable, given that it is being prepared on a train that’s rockin’ and rollin across America.

Breakfast and Lunch are first-in first-served, while Dinner has set dining times .. and unless you are a group of four, you WILL be sharing a table with strangers. We loved that (being gregarious souls) but I know that some people actually had the carriage attendant bring them their meals to their rooms instead.

Was the trip perfect? No But would we do it again? Yes indeedie!

In fact, we are already thinking about next year: maybe the City of New Orleans, or maybe the Lake Shore Limited, or maybe even the Empire Builder ….. hmmmmm.

(Today’s Travel Pic, btw, is of the California Zephyr at Glenwod Springs in Colorado)