It was about 40 years ago, as a 15 year old teenager, that I first got involved in politics.

I was in the youth group of a now-defunct political party, at around the same time as the then-brand-new southeast freeway was being opened.

As part of a protest, a colleague and I snuck onto the median strip of the freeway, and counted the number of people in cars during the peak period.

As you might imagine, the majority were driver-only, or at best driver and one.

We wanted to make the point that if only half the vehicles had been carrying a ‘full load’, then it would have delayed the need for further expansion for a decade!

So I gathered all our data – and rang a radio station to get it onto the news.

When the journalist I got asked if I had a media release, I was flummoxed. I hadn’t even thought about that.

Now, I was lucky that the guy (and I have no idea who it was) was in a good mood – so he taped a conversation with me, to get the basic details … and then he dictated a media release back down the phone to me, because he knew other media outlets wouldn’t be so understanding.

This was the exception to the rule that I would observe countless times over the next 40 years … newsrooms are extremely busy places, understaffed and overworked.

Offer them good, clean, ready-to publish copy and you’ll almost certainly get your story on air, or in print.

But if you make it hard for the frazzled journalist to get to the nub of your story, and it gets tossed in the waste-basket without a second glance.

Actually, today it’s even worse -the wastebasket is electronic .. so you don’t even get the satisfaction of thinking the journo might have got a paper cut from tossing your hard work aside! 🙂 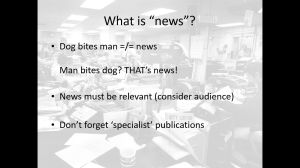 So – what do you need to know, to write a good media release?

First up, remember this adage:

Your media release has to be about something interesting, otherwise it’s a waste of time and paper (or pixels, as the case may be)

So – if you were writing a media release about this blog-post, saying “A retired journalist told readers about writing media releases?” Not likely to get a lot of coverage.

The other thing to consider is the audience for the publication you are pitching to.

Obviously, if you are aiming a story at the Southern Star newspaper, it has to be ultra-local – talking about the impact on individual suburbs and their residents.

If you are pitching to a regional radio station then make it relevant to towns in their area.

If you are pitching to a city-wide news service, or to a Cap-city newspaper, then the focus has to be wider.

If you are writing a media release aimed at a morning TV program, then it should be relevant to their audience (eg housewives and retirees).

If you are writing for a specialist publication (perhaps your industry newsletter, or an academic discussion group) then focus the story on their interest areas … so your media release has to be newsworthy, and relevant.

Now, secondly, forget everything you’ve ever been told about writing a story, and adopt what’s called the ‘Inverted Pyramid’

Normally when you are writing a story, you will start at the beginning, then tell the story in some sort of logical order (normally chronological, but it may also be adding fact upon fact) until you reach the conclusion.

In writing news, you do that backwards. You START with the most important point, then the supporting material, then the fluff .. the idea is that the editor can cut the least important stuff from the bottom without impacting on the story.

There are historical reasons why the Inverted Pyramid style was adopted – among other things, communications were patchy during events like the American Civil War, with telegraph wires coming down at any time, etc, so reporters would put the most important stuff up front, where it would get through.

Consider the difference that has made … The first reports of the Charge of the Light Brigade (where hundreds of soldiers were gunned down in a futile, and militarily stupid, assault) would not be recognizable today. The reporter talked of the heroism, and of the splendor – it wasn’t until about the 10th paragraph that the extent of the disaster became known – and then it took another few days for the exact casualty figures to come in.

Compare that to last year’s terror attacks in Paris … within minutes of the news breaking, the lead quickly became “x number of people, have died in coordinated terror attacks across Paris” .. notice how that puts all of the important stuff in the first sentence?

That’s because the reports are all about the Five Ws and an H ..

The six key things that should ALWAYS go at the front of your media release are the Who, What, Where, When, Why and How – and they should be right up front, because they are the important stuff.

Pictures are important, too – as long as they are interesting images – because newspaper editors are always looking for something visual to go with stories.

Always look for the most newsworthy ‘angle’ to the story .. and put it up front – don’t bury the lead.

Always ask “what are the five Ws and an H of this story – who, what-where, when why and how”

Supply images if they are interesting, high quality, and you own the copyright to them – never pinch something from the internet.

NB – this is a cut-down version of a lecture I give when I am an “enrichment speaker” on cruise ships. If you ever spot my name on the daily newsletter of a cruise you are taking, I hope you’ll come along and take part 🙂