It’s curious how every cruise-line … in fact, every ship … differs from each other – and yet there is a certain sameness about them all, as well.

Shirley and I are currently on the Royal Caribbean Legend of the Seas, sailing toward New Caledonia.

This is our sixth cruise, on our fifth ship – and it has its differences – but there are also some marked similarities with the others as well.

Now, I should say upfront that all the ships we have sailed on are of a similar size – so a small-ship cruise, or one of the mammoth ‘Obscenity of the Seas’ type ships might be different – but I’m amused at the fact that all of the staff badges look alike, from a distance .. that the stewards all have the same harried expression,  mixed with an irrepressible cheerfulness.

The glass lifts, the ‘special offers’ in the spa, cookie-cutter corridors .. they all make the Legend of the Seas seem like the Pacific Dawn, or the Carnival Spirit, or the MSC Musica, or the Sun Princess.

But it’s the differences that make cruising special, and after just 12 hours on board this 2100-passenger Royal Caribbean ship, I’ve noticed some already.

This ship is currently based in Australia – but they aren’t even pretending to ‘Aussiefy’ it. 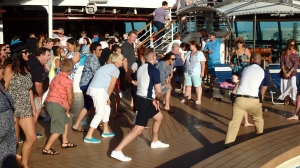 All charges are in US dollars, for example (except, oddly, the daily gratuity which IS listed in Australian currency) – and Royal Caribbean have made it clear they will NOT be changing.

There’s also no suggestion of Australian power points – and if you try to bring aboard a power-board and a single converter, that will be confiscated.

Meaning you either need to bring multiple adapters, hire one from Guest Services for a refundable fee, or if they run out, buy one or more at inflated prices in the on-board shops.

We’re doing all right – we have two US and two European sockets in our smallish interior cabin – but over the years, we’ve gathered a range of socket adapters, so we’ve been able to fill them all.

However, t’s still a trap for the first-timer.

On the subject of first-timers, a nice touch today was a special ship’s tour by one of the cruise director’s staff: she took first-time cruisers (and first time Royal Caribbean passengers) around the ship, explaining the sorts of things that newbies might not even know to ask.

It was a lovely tour, and the staff member concerned handled the group with style, grace, and humour.

I also have to say I like the layout of the Windjammer Café buffet .. instead of a couple of long cafeteria-style serving areas, there are islands each containing certain types of food – allowing greater flexibility and less queueing. 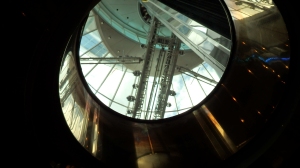 The Main Dining Room, the Romeo and Juliet rooms, are quite pretty – and in fact almost understated compared to the ostentatious opulence of some MDRs – and the food, such as we have had so far, was quite good.

Of course, we are still only one day in, so I’ll keep you posted.

But in the meantime – it’s a cruise, so you KNOW we are gonna have a good time!