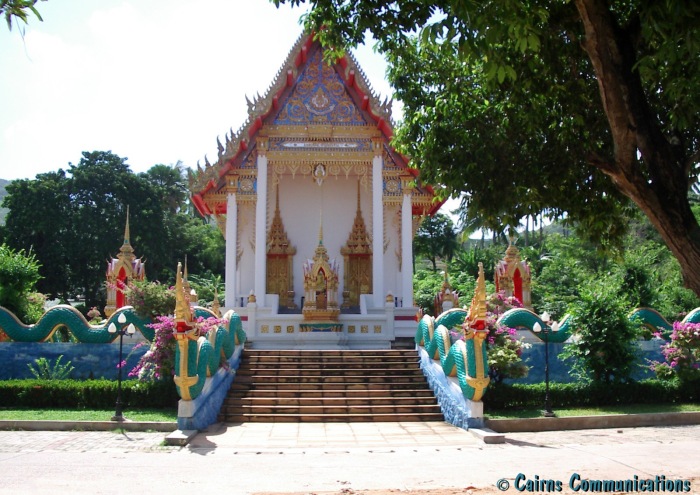 The theme letter for our ‪‎travel pics this week is T, for Thailand

Lets start with a parish church – or the Thai Buddhist equivalent!

Karon Beach is a beachside village about 10km from Patong, the tourist heart of Phuket.

It’s largely a quiet backwater, especially compared to the Bangla Road and Paradise Complex areas of Patong (popular with straights and gays respectively)

As we were wandering around one day, we found the Wat Suwankiriket – one of 27 Wats (or temples) on Phuket.

It is effectively the equivalent of a parish church and parochial school – but it is quite beautiful with it’s jet-black statue of the Buddha, and it’s green concrete snakes (Nagas) protecting the Stupa, and the prayer halls.

The day that we just wandered in there was a low-key funeral being held for an ex-pat who had become a Buddhist and moved to Phuket years before (the order of those two events wasn’t quite clear).

We felt it would be rude to intrude, so took pictures instead of a small Ubosot (or ordination hall – the most holy building in a Wat).

Outside are King Nagas, guarding the steps.