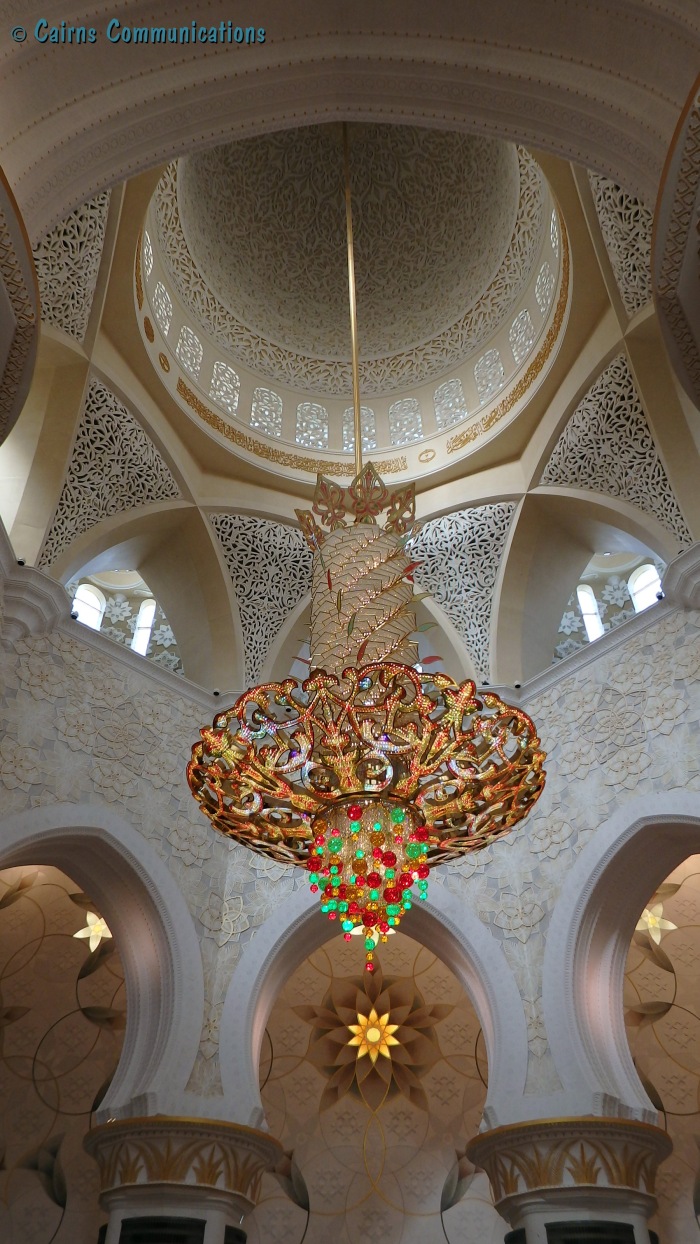 The theme letter for our ‪‎travel pics this week is X (Marks the spot).

Instead, we’ll start with an eXquisite chandelier in the Sheik Zayed Grand Mosque, in Abu Dhabi.

It’s not unusual for religious buildings to be adorned in magnificent fashion – its part of the tribute paid to the deity-of-choice.

For example, there are ikons or images of saints (in Christianity) or stories and images of the gods (Hinduism, Classical Greek and Roman), or representations of the Buddha, or whatever.

But in Islam its all about nature, or geometric shapes like this.

The reason? Islamic tradition says the depiction of sentient beings is ‘Haram’, or forbidden. That certainly includes people, and probably includes animals.

I say ‘Islamic tradition’ because the Quran itself does not forbid such artworks – merely forbidding ‘idolatry’ or images of God, Muhammad, the prophets etc.

However, the Hadith (commentary and observations about Muhammad which are second only to the Quran in holiness) strongly discourage depictions of people or animals.

So, mosques like the Sheik Zayed Grand Mosque – which is in the heart of Abu Dhabi – use patterns and motifs to encourage serenity and reflection in worshippers.

This complex is a truly stunning edifice. It is beautiful, and imposing, and there are amazing visual delights everywhere you go – even the men’s ablution facilities are amazingly ornate as well as utilitarian.

But the main prayer hall is the centrepiece – and this chandelier is just one of the features that had me in awe.

NB: I am not a Muslim – so it’s possible I am oversimplifying or even misrepresenting things here. If I am, please let me know!